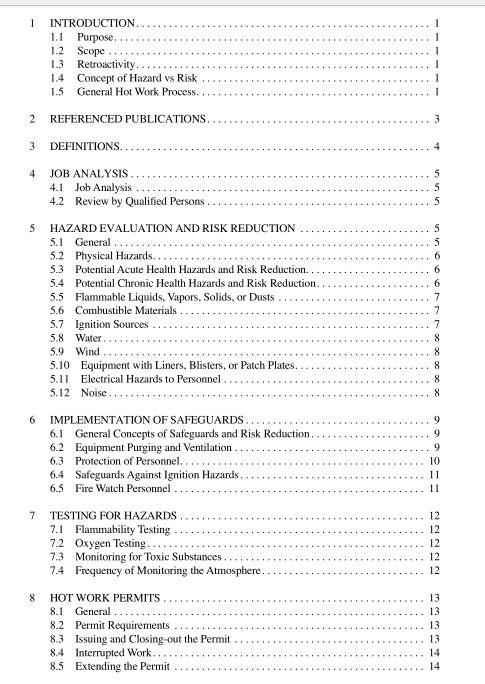 API RP 2009 pdf download Safe Welding, Cutting, and Hot Work Practices in the Petroleum and Petrochemical Industries
3.1 acute hazard: Capable of causing effects occurring from exposure over a short time, usually within minutes or hours. An acute exposure can result in short-term or long- term health effects. 3.2 chronic health hazard: Capable of causing adverse health effects resulting from exposure over a long period of time (often at low-level concentrations).
3.3 competent person: A person identiÞed by the employer as being capable of identifying existing and predict- able hazards in the surroundings or working conditions which are unsanitary, hazardous, or dangerous to personnel, and who has authorization to take prompt corrective measures to eliminate them (OSHA 1926.32). The concept of Òcompetent personÓ is performance-based relative to the context of the work to be done.
3.4 confined space: An enclosure with known or poten- tial hazards and restricted means of entrance and exit, which is not normally occupied by people, and is usually not well venti- lated. Examples of conÞned spaces in the petroleum industry include: process vessels, vessel tower skirts, ßare stacks, boil- ers, storage tanks, tank cars and trucks, vaults, large-diameter piping, and under certain circumstances, spaces located below ground level, such as pits (OSHA 1910.146).
3.5 exposure limit: For chemical agents, a measure of the maximum airborne concentration limits for toxic sub- stances to which workers may be exposed without protection (e.g., respirators). Exposure limits are usually expressed in parts per million or milligrams per cubic meter. Material Safety Data Sheets (MSDSs) from the manufacturer or sup- plier of the material should list exposure limits.
3.6 fume: Small diameter particulate matter formed when vaporized high molecular weight materials condense from the gaseous state. Although solids, fumes are small enough to behave like gases.
3.7 hazard: An inherent chemical or physical property with the potential to do harm (ßammability, toxicity, corrosiv- ity, stored chemical or mechanical energy). 3.8 hot work: An operation that can produce enough heat from ßame, spark or other source of ignition, with sufÞcient energy to ignite ßammable vapors, gases, or dust. Hot work includes such things as electric arc and gas welding, chip- ping, ßaming, grinding, gas cutting, abrasive blasting, brazing and soldering. Special procedures and permits are required when hot work is to be performed in certain areas. (Appendix D of ANSI Z49.1 lists more than 90 welding and allied pro- cesses that would qualify as Òhot work.Ó)
3.9 hydrogen blister: Bulge in steel caused by high- pressure molecular hydrogen trapped at an internal ßaw within steel.
3.10 inerting: The process of eliminating the potential for a ßammable atmosphere by using an inert gas such as nitro- gen, carbon dioxide or steam (water vapor) to displace oxy- gen required for ignition.
3.11 lower flammable limit (LFL): The concentration of a vapor in air (or other oxidant) below which propagation of ßame does not occur on contact with an ignition source. The lower ßammable limit is usually expressed as a volume percentage of the vapor in air. Sometimes called Lower Explosive Limit (LEL).
3.12 permissible exposure limits (PELs): Federal regulations set by the Occupational Safety and Health Administration, U.S. Department of Labor, and found at 29 Code of Federal Regulations 1910.1000 and in the substance- speciÞc standards which follow.
3.13 permit: A written document authorizing a work activity and deÞning the conditions under which the work shall be conducted. Normally signed by both the recipient and an issuing competent person with authority to allow the activ- ity to take place.
3.14 personal protective equipment, PPE: Equip- ment (such as protective clothing, respiratory devices, protec- tive shields or barriers) worn or used by individuals to protect eyes, face, head and extremities from hazards of equipment, processes or environment capable of causing injury or func- tional impairment. 3.15 purging: The process of eliminating the potential for a ßammable atmosphere by displacing hydrocarbons from a potential hot work area to eliminate the fuel required for ignition. 3.16 qualified person: A person designated by the employer who, by possession of a recognized degree, certiÞ- cate, or professional standing, or by extensive knowledge, training and experience, has successfully demonstrated abil- ity to identify and solve or resolve problems relating to the subject matter, the work, or the project and, when required, is properly licensed in accordance with federal, state, or local laws and regulations.