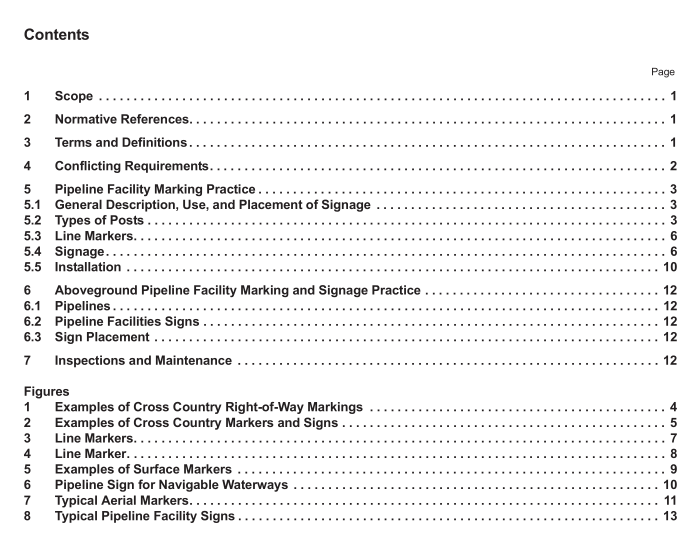 API RP 1109 pdf download Marking Liquid Petroleum Pipeline Facilities
5.1 General Description,Use, and Placement of Signage
5.1.1 Signage can be found in various shapes, sizes, and designs. Permanent pipeline facility markers and signsare used to convey the following information to the public and emergency responders:
a) the presence of a liquid petroleum pipeline facility;
b) a potential hazard warning;
c) the contact telephone number of the pipeline operator for any of the following:1) to determine the location of the buried pipeline,
2) to receive authorization to cross or occupy the pipeline rights-of-way,3) to report emergencies relating to the pipeline or pipeline right-of-way.
5.1.2 Pipeline personnel may use pipeline markers, aerial markers and other signs to readily identify their pipeline,pipeline right of way,or crossing in the course of various day-to-day operation and maintenance activities oremergency response.
5.1.3 The placement of signage is dependent on the purpose, type of signage, and local conditions.When installingpipeline markers, for example, consideration should be given to installing them on each side of public roads, railroadcrossings fence lines, property lines, water crossings, above ground crossings, and other locations accessible to thepublic. When installing Aerial Markers, consideration should be given to terrain, land use adjoining the ROW,flightpath, and physical points along the ROW to be identified, such as Pls and main line—lateral take-offs. Whendetermining the frequency and spacing between markers,consideration should be given to land use,terrain,environment, population density, local ordinances, and other damage prevention considerations such as specialexcavation activity, one call law exemptions, and frequency of excavated related near misses.
Line Markers should be installed over each pipeline; however,there are locations where it is impractical, such aswhen a pipeline runs down the middle of the street, parallels the road under the shoulder,or traverses heavilydeveloped urban areas. Line markers that are not placed over the pipeline should denote that the line is ofiset.Supplemental signage such as curb markers, ground level markers or pavement decals should also be considered.
At a minimum, locations should be chosen to meet or exceed the requirements of 49 CFR Part 195.
Examples of cross country right-of-way line markings are shown in Figure 1 and Figure 2.
5.2Types of Posts
The type of post used will be dependent on the signage used and location.Posts may be made of any materials thatwill ensure adequate strength, stiffness, visibility, and durability. To maintain structural integrity and appearance, somepost materials require surface protection against above- and below-ground corrosion or weathering.A proven coatingsystem that provides a suitable finish and nonfading color should be selected for this purpose. The following criteriashould be applied in the selection of marker posts.
a) Metal pipe posts should be straight, sound, and have a nominal diameter of 2 in. or larger.b) Metal structures designed for use as posts may be used.
c)Straight posts made from debarked trees and treated with a pressure-applied chemical preservative may be used.
The post should be sized to provide multiple years of use with consideration for burial type, burial depth, soilcondition, etc. Wood posts are not recommended where brush or grass fires may be expected.
d) Square precast reinforced-concrete posts having a minimum cross-sectional area of 16 in.2 may be used. Special
conditions, such as spalling during freeze and thaw cycles, should be considered when specifying material forthese types of posts.
e)Posts made of Polyvinyl-chloride (PVC),Polyethylene,and fiberglass may be used. Materials used, however,
should be resistant to ultraviolet exposure and suited to the environment where installed (see Figure 3)
f) Other materials are acceptable provided they meet the general criteria discussed above.
5.3Line Markers
5.3.1 Part 195 of 49 CFR requires that certain information be presented on line markers in lettering of a certain sizeand stroke. The regulations further require that line markers be placed over all buried pipeline at each public roadcrossing, at each railroad crossing, and in sufficient numbers along the remainder of each buried pipeline so that itslocation is accurately known.
5.3.2The line marker’s message should be presented on strong, durable material finished to resist the effects ofexposure and vandalism. The message should state at least the following: “WARNING” followed by the words“PETROLEUM [or the name of the liquid petroleum transported] PIPELINE.” The lettering should be at least 1 in. highwith an approximate stroke of 1/4 in.on a background of sharply contrasting color.lt should also contain the name ofthe pipeline operator with a telephone number, including an area code, where the pipeline operator can be reached atall times.
5.3.3 The line markers depicted in Figure 3 and Figure 4 are examples of line markers in general use by the liquidpetroleum pipeline industry. The dimensions，wording， colors， and configuration shown on the figures arerecommended for good visibility. The size and style of the lettering identifying the pipeline operator are optional.Atrademark or other identifying symbol may appear as part of the pipeline operator’s identification.
5.3.4 Caution should be used when installing a line marker anywhere other than directly over or in proximity to theburied pipeline to avoid any possible misinterpretation as to where the actual pipeline is located.
5.4Signage
5.4.1 The pipeline operator may use markers and signs in addition to line markers to aid in determining the locationsof the pipeline.Examples of such markers are listed below:
a) aerial patrol markers;
b) prominently colored posts at fences, and right-of-way limits of roads and railroads;c) markers at banks of water crossings;
d) stenciled markings on the surface of pavements (see Figure 5);e) buried tape or warning mesh;
f)casing vents;