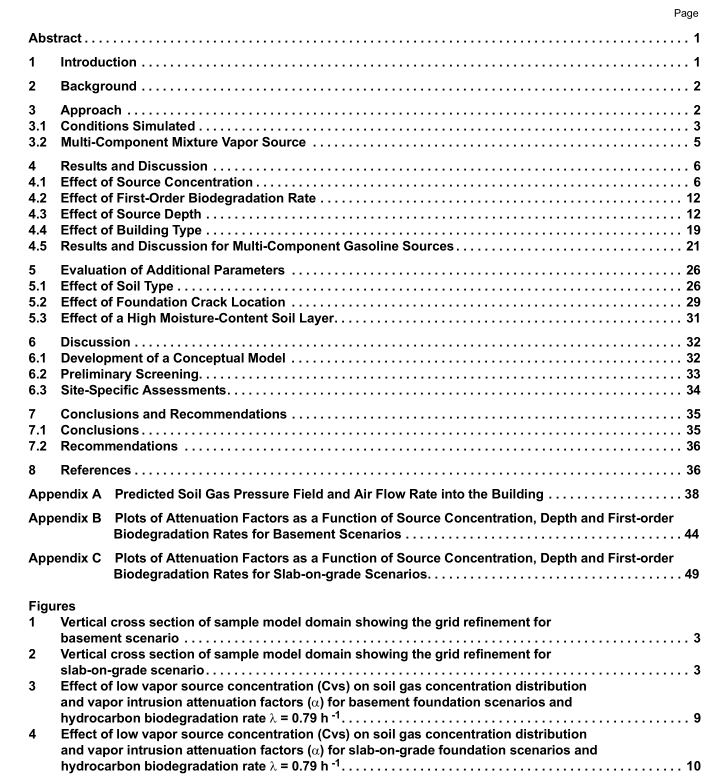 API PUBL 4775 pdf download Simulating the Effect of Aerobic Biodegradation on Soil Vapor Intrusion into Buildings Evaluation of Low Strength Sources Associated with Dissolved Gasoline Plumes
3.1.2 Depth of Source Below the Building Foundation The depth of the source below the building foundation ranged from 1 to 10 meters (m). This encompasses a range of shallow source depths that is of interest for most vapor intrusion investigations.
3.1.3 Biodegradation Rates DeVaull (2007) compiled a total of 84 data sets of reported laboratory and field calculated biodegradation rates for aromatic hydrocarbons measured by multiple investigators. The data included biodegradation rates for individual chemicals: benzene, toluene, ethylbenzene and xylene (BTEX), trimethylbenzene, and naphthalene; as well as rates for mixed BTEX chemicals. The geometric mean of the water-phase first-order biodegradation rates (λ) for the values reported in those studies is 0.79 h -1 .
The values of λ considered in this work are: 0.079, 0.79 and 2 h -1 . These values were selected based on the geometric mean value reported by DeVaull with higher and lower values included to assess the sensitivity of this parameter. The no-biodegradation case (λ = 0) was also included in this work for comparison purposes. The oxygen threshold air concentration for biodegradation to occur is a user-defined input to the model. In this study, the oxygen threshold was assumed to be 1 % vol/vol (normalized concentration equal to 0.05). This threshold was chosen based on previous published biodegradation studies. Field data reported in Roggemans, et al. (2001) show decreasing oxygen concentration with depth until reaching a constant value of 2 % vol/vol. Additionally, Bordon and Bedient (1986) report that aerobic biodegradation is observed when the oxygen concentration in groundwater is above 0.1 mg/L-water (vapor equilibrium oxygen concentration of 0.24 % vol/vol). In practice, it is difficult to accurately measure very low oxygen concentrations, and it is possible that the threshold is below these reported values. If microorganisms can degrade hydrocarbons in the presence of less than 1 % oxygen, then these simulations would underestimate the influence of bio- attenuation. These simulations also assume that there are no other natural oxygen demands in the vadose zone soils (i.e. oxygen is consumed only by hydrocarbon biodegradation). Therefore, the simulations may overestimate the effect of biodegradation if organic-rich soils are present and their natural demands on oxygen reduce the oxygen concentrations below the levels needed for the biodegradation to occur.
3.2 Multi-Component Mixture Vapor Source Petroleum hydrocarbon releases are typically mixtures of many aerobically biodegradable compounds, so the migration and bio-attenuation of individual constituents may be affected by the presence of the other compounds in soil vapor. This is expected to be significant due to competition for the oxygen available for biodegradation. Therefore, a set of simulations was also performed using a multi-component vapor source. The composition of a weathered gasoline described by Johnson et al. (1990) was selected for modeling.
To facilitate the calculations, the gasoline composition was grouped into seven hydrocarbon constituents/fractions following the approach presented by the Total Petroleum Hydrocarbon Criteria Working Group (TPHCWG, 1997). The source vapor concentration was calculated for two cases: (1) vapor concentrations in equilibrium with a NAPL source and (2) vapor concentrations in equilibrium with a dissolved gasoline plume. The source vapor composition in equilibrium with a NAPL source scenario was calculated using Raoult’s Law. To determine the hydrocarbon composition for the dissolved phase source scenario, a leaching calculation was performed following the approach included in the EPA Soil Screening Guidance (USEPA, 1996). The leaching calculations were based on equilibrium partitioning between sorbed, vapor and aqueous phase. The groundwater source concentration was determined by applying a dilution factor to the calculated leachate concentrations. The vapor source concentrations were calculated from the groundwater concentrations assuming Henry’s Law partitioning.
Both types of multiple compounds sources (i.e. NAPL and dissolved plumes) were used in simulations to assess the expected attenuation factors and oxygen consumption (or availability). The compositions of the assumed multi-component sources used in the simulations are presented in Table 3. The biodegradation rates for aromatics and for aliphatics groups of hydrocarbons in the multi-compound mixture were chosen based on the geometric mean values published by DeVaull (2007). For aromatics, a biodegradation rate of 0.79 hr -1 was used and for aliphatic compounds, a biodegradation rate of 71 hr -1 was used.