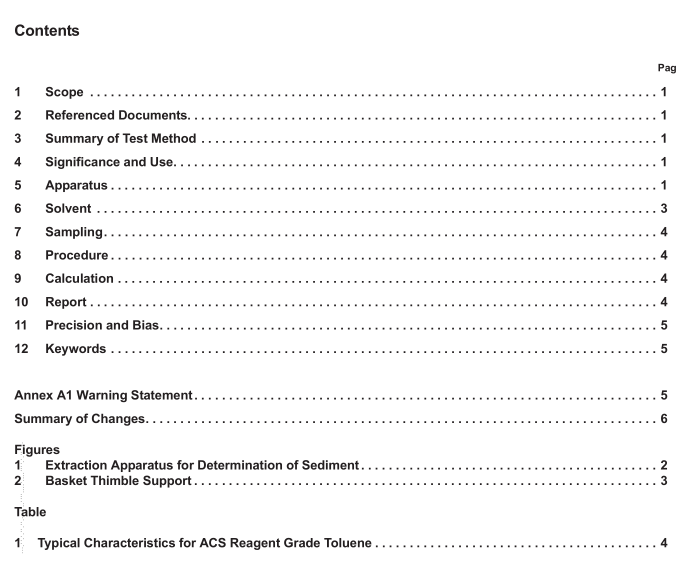 API MPMS 10.1 pdf download Manual of Petroleum Measurement Standards Chapter 10—Sediment and Water Section 1—Standard Test Method for Sediment in Crude Oils and Fuel Oils by the Extraction Method
6.1.1 The typical characteristics for the ACS reagent are shown in Table 1.
7. Sampling
7.1 Sampling shall include all steps required to obtain an aliquot ofthe contents ofany pipe, tank, or other system and to place the sample into the laboratory test container.
7.2 Only use representative samples obtained as specified in Practices D 4057 (API Chapter 8.1) and D 4177 (API Chapter 8.2) for this test method.
7.3 Draw test portions from the laboratory samples imme- diately after thorough mixing. Heat viscous samples to a temperature which renders the sample liquid, and homogenize using a mixer as described in 5.3, as necessary. The difficulties of obtaining a representative test portion for this determination are usually great, hence the need for great attention to the mixing and aliquoting steps.
7.4 As specified in Practice D 5854 (API Chapter 8.3), record the temperature of the sample before mixing. Mix the laboratory sample in its original container, using the mixing time, mixing power (speed), and position relative to the bottom of the container appropriate to the crude petroleum or fuel oil being analyzed, and as established by the verification ofmixing efficiency. To avoid the loss of light ends from crude oil or other samples containing volatile material, operate the mixer through a gland in the closure ofthe sample container. Take the test portion for analysis immediately after mixing. Record the temperature of the sample immediately after mixing. If the rise in temperature during mixing exceeds 10°C (20°F), cool the sample, and repeat the mixing at a lower energy input. A rise in temperature greater than 10°C (20°F) may result in a decrease in viscosity that is sufficient for the sediment to settle.
8. Procedure
8.1 For referee tests, use a new extraction thimble (5.1.1.3) prepared in accordance with 8.2. For routine tests, thimbles may be reused. When reusing thimbles, the extraction to constant mass for one determination should be considered as the preliminary extraction for the succeeding determination. After several determinations (the accumulated sediment may be sufficient to interfere with further determinations), follow the procedure described in 8.3 to remove the combustible portion of the accumulated sediment. Avoid excessive reuse of thimbles, as over time the pores become clogged with inorganic material resulting in falsely high results. When in doubt regarding a higher than normal result, discard the thimble and retest using a new thimble.
8.2 Preparation ofa New Thimble—Rub the outside surface with fine sandpaper and remove all loosened material with a stiff brush. Give the thimble a preliminary extraction with the toluene, allowing the solvent to drip from the thimble for at least 1 h. Then dry the thimble for 1 h at a temperature of 115 to 120°C (240 to 250°F); cool in a cooling vessel, for 1 h, and weigh to the nearest 0.1 mg. Repeat the extraction until the masses of the thimble after two successive extractions do not differ by more than 0.2 mg.
8.3 Preparation ofa Used Thimble—Remove the combus- tible portion of the accumulated sediment by heating the thimble to a dull red heat for 20 min (preferably in an electric furnace maintained at approximately 750°C (1380°F)). Subject the thimble to a preliminary extraction as described in 8.2 before using it for another determination.
8.4 Place an estimated 10-g test portion of the sample in the thimble immediately after the sample has been mixed. Do not attempt to adjust this estimated 10-g portion to any exact predetermined amount. Weigh the thimble plus test portion to the nearest 0.01 g. Add 150 mL to 200 mL of toluene to the flask. Place the thimble in the extraction apparatus, place on the heat source, and extract with the hot toluene for 30 min after the solvent dripping from the thimble becomes colorless. Ensure that the rate of extraction is such that the surface of the mixture of oil and toluene in the thimble does not rise higher than to within 20 mm of the top.
8.5 When testing samples determined to have a water content greater than 10 % volume, use the assembly shown in Fig. 1, Apparatus B. In this procedure, remove any water in the test portion as its toluene azeotrope and is collected in the water cup, where it separates as a bottom layer. The toluene layer overflows into the thimble. If the cup becomes full of water, allow the apparatus to cool and empty the cup. 8.6 After the extraction is completed, dry the thimble for 1 h at 115 to 120°C (240 to 250°F) in the oven; cool in the cooling vessel, for 1 h; and weigh to the nearest 0.1 mg.