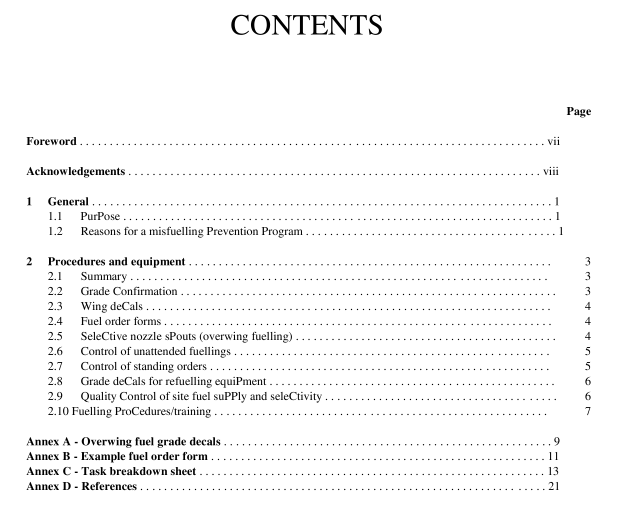 API IP RP 1597 pdf download PROCEDURES FOR OVERWING FUELLING TO ENSURE DELIVERY OF THE CORRECT FUEL GRADE TO AN AIRCRAFT
2.2.3Grade/product names
Standard product names shall be used by all site staff toavoid confusion. It is not uncommon for customers touse unusual or abbreviated product names which canlead to confusion.This is particularly apparent wherecustomers have operated internationallyi or may onlyuse one grade of fuel in their fleet and may not be awareof the importance of grade confirmation.
Orders received from customers (or frominstructions relayed via other members of staffy whichdo not use these product names shall be clarified.Orders such as “aviation fuel” or “gasoline”, etc., havethe potential to cause the delivery of the incorrect gradeof product.
Rcfuclling staff shall only accept verbal fuel gradenotification from the customer when there are winggrade decals fitted adjacent to the fuelling point of cachaircraft fuel tank to be filled.
2.2.4Use of wing decals
Grade confirmation also occurs at the time of fuellingvia the use of wing grade decals.The refuelling staffshall confirm, prior to commencement of fuelling, thatthe aircraft wing grade decal is the same grade as in therefuelling vehicle/equipment by observing the gradedecal on the refuelling vehicle/equipment. Fuelling shallnot commence unless they are the identical grade.
where wing grade decals are not fitted, the fuellingshall only progress when either:
1.The customer fits the wing decals or
2. The customer completes a written Fuel Order Form
– refer to sections 2.3 and 2.4.
2.3 WING DECALS
wWing decals should be designed as shown in Annex Aand shall be readily available at all airport locations.
Customers should be encouraged to fit andregularly replace wing decals.
The use of wing decals provides an additionalbarrier against misfuelling by providing a form of grade
confirmation immediately prior to the fuelling. Thewing decals are colour-coded as are the overwingnozzles (section 2.8).
– Red background with white lettering- avgas.- Black background with white lettering – jet fuel.
Wing decals should be supplied to customers forapplication by the customer. Refuelling staff shall notapply the decals because this could compromise thegrade confirmation step.
2.4FUEL ORDER FORMS
Fuel Order Forms are used to obtain written
confirmation from the pilot/aircraft representative of thegrade of fuel, quantity of fuel to be delivered into cachaircraft fuel tank and the aircraft registration
information. They are used in circumstances whereverbal grade confirmation is not considered adequate.
Fuel Order Forms shall be required where:
-The aircraft to be fuclled (overwing) is not fitted
with wing decals.
– The wide jet nozzle spout is removed and replacedwith a narrow spout to complete a fuelling of
certain jet fuel type aircraft where the fuelling portwill not accept the wide ject fuel spout.
—Fuclling of compression ignition piston (diesel)
powered aircraft.
An example of a Fuel Order Form is contained in AnnexB.
lf customers provide written advice of graderequirements on their own order documentation, thisshall not be considered sufficient as a replacement forthe site Fuel Order Form. Fuel Order Forms should bedesigned so they cannot be confused due to any loss ofcolour-coding when photocopied.
2.5 SELECTIVE NOZZLE SPOUTs
(oVERWING FUELLING)
Grade selective nozzles use different sized spouts foravgas and jet fuel.Jet fuel nozzles utilize a large (wide)diameter spout while avgas nozzles utilize a smallerdiameter spout.See SAE Aerospace Standard AS 1852Nozzles and ports – Gravity fuelling interface stariclardd for civil aircraft for details on both fuelling nozzle spout and aircraft filler port design requirements.
Using the wide jet nozzle spout creates a physical barrier to prevent insertion of the wider jet spout into the avgas fuelling orifice: this is only the case if the correct airframe fuelling port per SAE AS 1852 is installed. Unfortunately, some avgas aircraft still have large diameter fuel ports which can accommodate the wider jet nozzle spout. Pilots and aircraft owners should be encouraged to fit the selective fuel port modification kits which are available for most avgas powered aircraft. Additionally, some jet aircraft have fuelling orifices too small to accept the wider jet spout and hence the wide jet nozzle spout has to be removed and a smaller nozzle spout fitted. When fuellings take place where the wide jet nozzle spout is replaced by a smaller spout the following steps shall be taken:
— Written procedures shall be prepared to ensure that after fuelling such aircraft, the smaller spout is removed and replaced by the larger spout. These small jet fuel nozzle spouts shall be kept in a secure