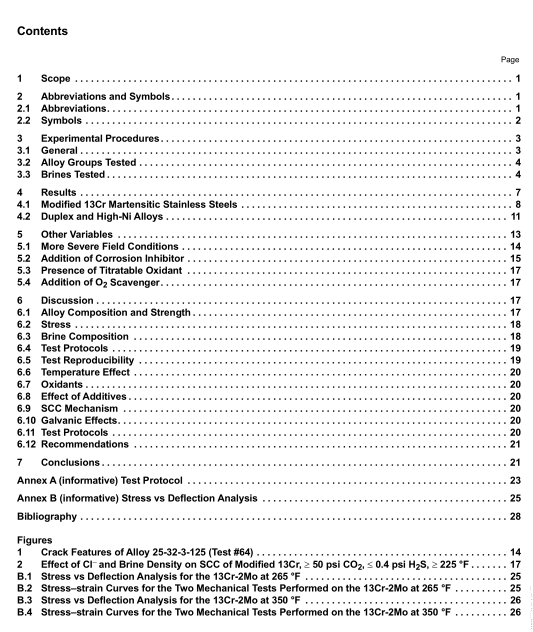 API 13TR1 pdf download Stress Corrosion Cracking of Corrosion Resistant Alloys in Halide Brines Exposed to Acidic Production Gas
5.4 Addition of O 2 Scavenger The possibility that SCC of duplex SS could result from decomposition of bisulfite (HSO 3  ) O 2 scavenger was raised [17], but our testing was limited to tests of modified 13Cr SSs in Test #29. Test conditions were 10 ppg NaCl, 265 °F, but made more severe by testing at three times the normal dosage of HSO 3  . No SCC or localized corrosion resulted. Further information on the action of oxygen scavengers in 12.4 ppg NaBr came from member company tests. Company B [9] tested duplex stainless steel at 450 °F with three times the normal addition of bisulfite level used in service (normal addition of 0.24 ml/L 26 % NaHSO 3 ).
These tests had no SCC after 28 days. Tests of high-Ni alloys with the same high level of bisulfite at temperatures of 450 °F also showed no SCC after 28 days of exposure. Successful use of erythorbate O 2 scavenger has been demonstrated in a number of laboratory tests cited. Elimination of SCC in duplex SS following addition of an O 2 scavenger (Table 17) in [6] can be attributed to removal of trace O 2 in CaCl 2 tests.
6 Discussion
6.1 Alloy Composition and Strength For each alloy group, higher alloy content resulted in higher resistance to SCC: Ni in high-Ni alloys, Cr+W in duplex SSs, and Mo in modified 13Cr martensitic SSs. In the modified 13Cr group, the percentage of retained austenite cited in Table 4 may be a variable affecting SCC susceptibility. The bar product (1.7 % Mo) with a higher percentage of retained austenite was more susceptible than tubular products with lower Mo content. No clear effect of strength (13-6-2-95 vs. 13-6-2-110) was observed, with the 95 grade having a higher percentage of retained austenite than the 110 grade. Support for this conclusion was obtained in SEM studies that showed high retained austenite along the prior austenite grain boundary [19], which is the path of crack propagation. [2] Yield strength was not a significant variable in modified martensitic SSs. In comparing test results of 13-6-2, the 95 grade showed no higher SCC resistance, when compared to the 110 grade. The 13Cr-L80 grade of martensitic SS was resistant to SCC in current tests, as well as the more severe tests in brines containing SCN  reported earlier. [1] However, SCC of 13Cr did occur in the higher strength (95 grade) 13Cr martensitic SS. [6]
6.2 Stress SCC response was not highly sensitive to stress levels in tests with modified 13Cr martensitic SSs within the ranges used in this program. This was demonstrated by a comparison of C-rings, with compression calculated using room temperature values of the YS and Young’s modulus, with de-rated C-rings using test temperature values to calculate the C-ring compression. In 14 tests, beginning with Test #69, comparison was made between paired C-rings, one de- rated C-rings and the other with higher stress, based on room temperature values of the YS. In most cases, there was no difference.
In three out of six pairs, SCC occurred on only the de-rated C-ring. Other procedures for applying stress may yield test results similar to current C-ring tests. Company A tests (see Table 13) report no significant difference between C-ring and four-point bent beam tests. 6.3 Brine Composition Rank ordering of brine severity was the object of several sets of tests, cited in Tables 13 and 16. No clear pattern is apparent in API tests of modified 13Cr SS in seven aerated brines (Table 12). However, tests of modified 13Cr SSs acidified by CO 2 establish domains of acceptable brine use under conditions of exposure to CO 2 . Test results listed in Tables 7 to 9 are plotted in Figure 2, using Cl concentration (g/l) vs brine density (ppg) as coordinates. There is remarkable consistency in test results from many laboratories. These results suggest that the variables introduced in testing commercial formulations, containing corrosion inhibitors and O 2 scavengers, did not introduce a significant bias toward SCC resistance.