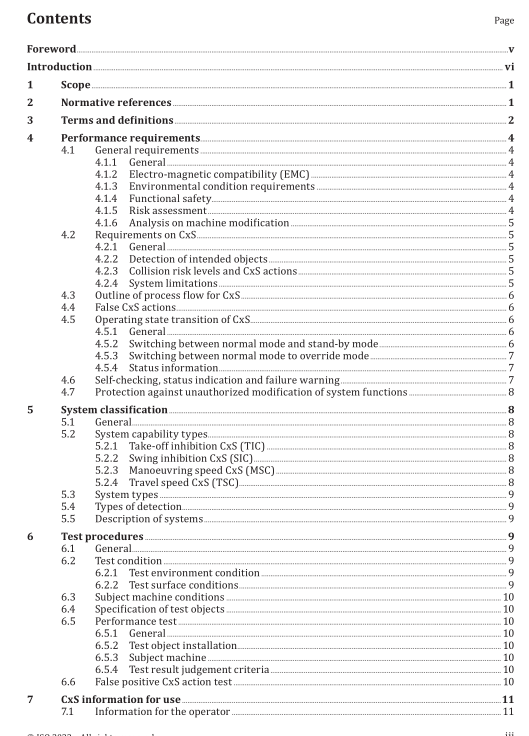 ISO 21815-1 pdf download Earth-moving machinery — Collision warning and avoidance — Part 1: General requirements
4Performance requirements
4.1General requirements
4.1.1 General
Machinery and systems shall comply with the safety requirements and/or protective/risk reductionmeasures of this document. In addition, the machine and systems shall be designed according to theprinciples of IS0 12100:2010 for relevant but not significant hazards which are not dealt with by thisdocument.
This document specifies the principles of operation,basic functionality, system requirements andgeneral test requirements for collision warning and collision avoidance systems.The lSo 21815 seriesintends to support the operator to safely operate the machine.
The ISO 21815 series is not intended to require plug-and-play capability between CxS devices andmachines. Technical details not described in this document should be agreed upon between the CxSdevice manufacturer, the machine manufacturer and system integrator, as applicable.
4.1.2 Electro-magnetic compatibility (EMC)
A CxS device providing cWs capability shall be in conformance with ISO 13766-1.A CxS device thatprovides CAS capability shall be in conformance with both IlSO 13766-1 and IS0 13766-2.The EMCtesting of the CxS device may be performed treating the Cxs device as an electronic sub-assembly orwith the Cxs device incorporated into the machine.
NOTE The addition of a Cxs device could negatively impact conformance of the machine to IlS0 13766-1 orISO 13766-2 and can require a combined re-evaluation of the CxS-equipped machine.
4.1.3 Environmental condition requirements
Safety-related parts (SRP) of a CxS device providing CAS capability identified according to the definitionin ISo 19014-1 or the ISO 13849 series shall meet the requirements of ISO 19014-3.
4.1.4 Functional safety
The consequence of adding Cxs device shall be analysed using a risk assessment.
The addition of a CxS device with CWS or CAS capability shall not negatively impact the performancelevel achieved (e.g.the ISO 19014 series,ISO 15998,the IS0 13849 series) of the safety control system ofthe original machine.
NOTE The addition of CxS device could require a combined re-evaluation of the CxS device-equippedmachine.
4.1.5Risk assessment
A risk assessment for a CxS device-equipped machine shall be completed according to the principles ofISO 12100 by the system integrator.All identified risks shall be mitigated to acceptable risk levels aspart of the risk assessment process.The results of the risk assessment shall be formally documented.
4.1.6Analysis on machine modification
The addition of CxS device shall require an analysis to be completed as it could negatively impact theoriginal machine’s safety and performance characteristics (guidance can be found in standards, e.g.theISo 20474 series, ISO 19296).
4.2Requirements on Cxs
4.2.1 General
The CxS shall detect intended objects(e.g. people, other machines,vehicles, and obstacles) within thecollision risk area and provide Cxs action as defined below:
– cwS shall provide a warning to instruct the operator to maintain the machine in a stationary state
if an intended object is present or to immediately apply evasive action.
-CAS shall provide interventional collision avoidance action without requiring an operator action.NOTE1 The collision risk areas can be in front, beside or behind machines along the travel path of the machine.For excavators and other machines where all or part of the machine can rotate, the risk area also includes thearea where the machine can rotate.A detailed guideline of a collision risk area and for the collision risk levelassessment are described in the other parts of the ISO 21815 series.
NOTE 2 The CxS does not necessarily cover all area that the machine can move.NOTE3 CAS can also provide warning to operator.
4.2.2 Detection of intended objects
Appropriate detection technology differs depending on the machine type and the object type intendedto be detected. ISO 16001:2017,Annex A summarises existing an object detection system (ODS).Thetechnologies should be selected, and combined as appropriate, according to the Cxs design concept,with consideration to the advantages and disadvantages of differing types. Comparison of systemfunctions is described in Annex B.
4.2.3Collision risk levels and CxS actions
The system shall,based on the detection information of intended objects and machine operatingconditions, determine the collision risk level and provide at least one of the CxS actions, as appropriate,as shown below:
– warning signal to the operator (CwS);
一 interventional collision avoidance action (CAS).
Interventional collision avoidance actions provided by the system depend on what functions areinstalled in the system.Collision risk level judgement criteria and interventional collision avoidanceactions depend on the machine type (such as dumper, dozer, hydraulic excavators and others).
4.2.4System limitations
Collision warning and avoidance systems that have limited capabilities (e.g.limited speed and distance)could have different limits of use based on the use cases that are defined in the other parts of theISO 21815 series.The limitations for each use case shall be defined in the operator’s manual.