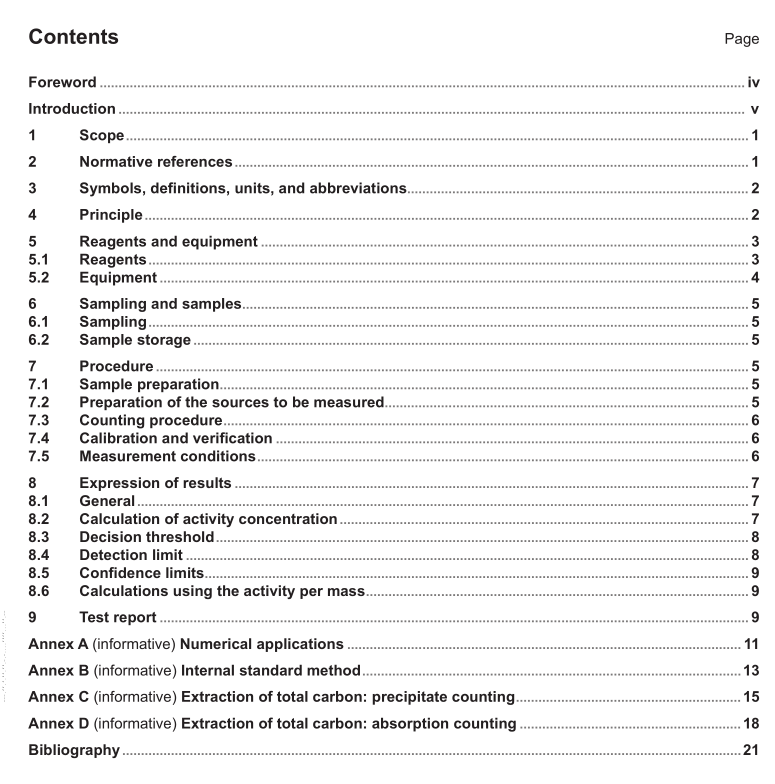 ISO 13162 pdf download Water quality — Determination of carbon 14 activity — Liquid scintillation counting method
Glass vials with low level of 40K, which exhibit a lower background than “normal” glass vials.
Polytetrafluoroethylene vials (PTFE)or PE vials with a layer of PTFEon the inside wall, which are stronglyrecommended for the determination of very low 14C concentrations. Diffusion of organic solvents is slowerthrough PTFE than through PE.These vials are used for long counting times when very low-level activityis to be measured.
Generally, the vials are single use. If the vial is re-used, efficient cleaning is essential.
To prevent interfering luminescence, counting vials should be kept in the dark and should not be exposed todirect sunlight or fluorescent light,particularly just before use.
NOTE Toluene-based scintillation solutions can physically distort PE and counting vials made of that polymer areunsuitable for use with them. Diffusion of organic solvents into and through the walls is also a serious drawback of PE vials.
6 Sampling and samples
6.1Sampling
Conditions of sampling shall conform to lSO 5667-1 and lSO 5667-3.
The samples shall not be acidified to avoid the destruction of the carbonic equilibrium (Co, HCO;,HzCO3).as specified in ISO 5667-3.
lt is important that the laboratory receives a representative sample, unmodified during transport or storage andin an undamaged container. lt is recommended that a glass flask filled to the maximum be used to minimize14cexchange with atmospheric Co2.
For low level activity measurements, it is important to avoid any contact between sample and atmosphereduring the sampling.
6.2Sample storage
lf required, the sample shall be stored in compliance with IS0 5667-3 for carbon dioxide. Iif the storage durationexceeds that specified in ISO 5667-3, it is advisable to store the samples in glass flasks.
7 Procedure
7.1 Sample preparation
On a raw sample, measurement of the test sample is generally performed without removal of suspendedmatter, if the sample has low levels of such material. If the activity of a fltered or centrifuged sample is to bemeasured, the removal of suspended matter shall be performed as soon as possible after sampling.
7.2Preparation of the sources to be measured
Known quantities of test sample and scintillation cocktail are introduced into the counting vial.After closing the vial, it shall be thoroughly shaken to homogenize the mixture.
The vial identification shall be written on the top of the vial stopper. The storage time depends upon thescintillation mixture , the mixture stability and the nature of the sample.lt is recommended that the measurementbe performed as soon as any photoluminescence or static electricity effects have become negligible (e.g.12 h).ln order to reduce photoluminescence effects, it is recommended that the above mentioned operations takeplace in dimmed light (preferably light from an incandescent source or red light); in addition, exposure of thevial to direct sunlight or fluorescent light should be avoided.
7.3Counting procedure
The test sample and background measurement conditions (measurement time, number of cycles or repetitions)are defined according to the uncertainty and detection limit to be achieved.
7.4Calibration and verification
Statistical control of the detection system shall be monitored by measurement of the reference vials (background,tritium and 14C) usually provided by the equipment supplier, e.g. in compliance with ISO 8258 [1],
The measurement of the blank sample is performed before each test or each series of sample tests underconditions representative of each type of measurement (Clause 4).
lt is essential to generate a quench curve for each type of matrix measured.The quench curve is valid only for:a)a given type of measurement apparatus;
b)a given type of scintillation cocktail;
)a given ratio of scintillation cocktail and test sample;d)a given energy window;
e)a given analyte radionuclide, e.g. 14C.
The quench curve is obtained with a series (e.g.10) of working standards, presenting different quench. Thematrix of the working standards is representatve of matrix of the samples to be measured (same scintillationliquid, same ratio scintillation liquid-test sample).The working standards may be prepared as follows:
similar quantity of 14C standard water solution in each vial. The activity of the certified standard shall besufficient for the counting ratio to be defined with a known statistical precision, even in the case of a strongquench;
the standard is completed with reference water until the volume of test sample is reached;the scintillation cocktail is added to obtain the desired ratio;
one working standard at least is used as it is. In the other working standards, increasing quantities ofquenching agent are added to simulate the expected range of quench values encountered in the samplesto be measured.
The quench curve relating s and fq with the quenching is used to determine the fq of the test sample, e.g. byfitting a polynomial regression curve.
7.5 Measurement conditions
The counting room used shall be suitable for the measurement apparatus and the activity levels of the samples.