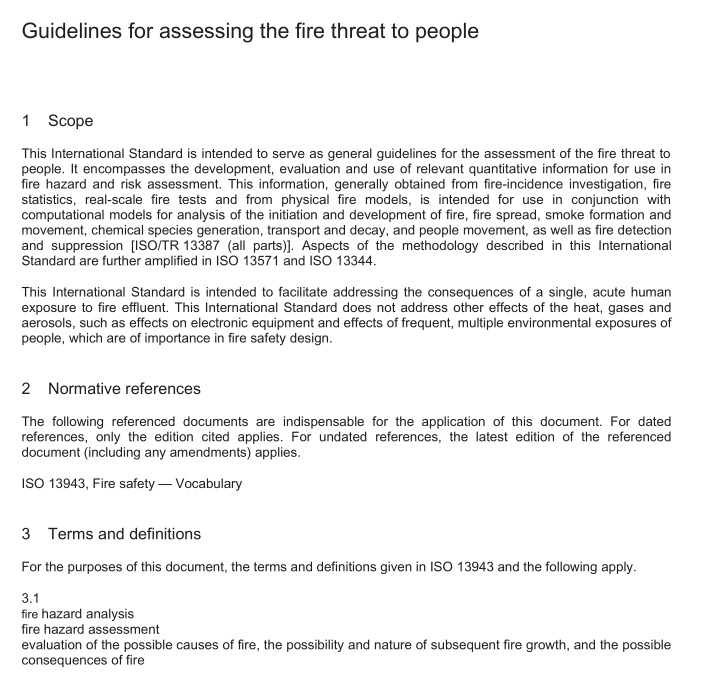 BS ISO 19706 pdf download Guidelines for assessing the fire threat to people
1 Scope
This International Standard is intended to serve as general guidelines for the assessment of the fire threat topeople. lt encompasses the development, evaluation and use of relevant quantitative information for use infire hazard and risk assessment. This information, generally obtained from fire-incidence investigation,firestatistics，real-scale fire tests and from physical fire models，is intended for use in conjunction withcomputational models for analysis of the initiation and development of fire, fire spread, smoke formation andmovement, chemical species generation, transport and decay, and people movement, as well as fire detectionand suppression[ISO/TR 13387 (all parts)]. Aspects of the methodology described in this InternationalStandard are further amplified in lso 13571 and lSo 13344.
This International Standard is intended to facilitate addressing the consequences of a single, acute humanexposure to fire effluent. This International Standard does not address other effects of the heat, gases andaerosols, such as effects on electronic equipment and effects of frequent, multiple environmental exposures ofpeople, which are of importance in fire safety design.
2Normative references
The following referenced documents are indispensable for the application of this document.For datedreferences,only the edition cited applies. For undated references,the latest edition of the referenceddocument (including any amendments) applies.
ISO 13943, Fire safety – Vocabulary
3Terms and definitions
For the purposes of this document, the terms and definitions given in lSo 13943 and the following apply.
3.1
fire hazard analysis
fire hazard assessment
evaluation of the possible causes of fire, the possibility and nature of subsequent fire growth, and the possibleconsequences of fire
4 General principles
4.1 Fire effluent and escape time
4.1.1 Life safety in a fire is greatly enhanced if the time available for occupants to escape exceeds the timerequired for them to escape and is threatened if the time required exceeds the time available.
4.1.1.1 As specified in lSO/TR 13387-8, the time required for escape includes the time from ignition of afire to its detection, the time from its detection to an evacuation warning to occupants,an occupant’spre-movement time(the time between becoming aware of an emergency and initiating egress) and the actualtravel time to a place of safety.
4.1.1.2 The time available for escape is the interval between the time of ignition and the time after which conditions become untenable, such that occupants are unable to take effective action to accomplish their own escape to a place of safe refuge. Guidelines for estimation of the time available for escape are specified in ISO 13571:2007. It involves procedures to evaluate the life threat components in a fire hazard analysis, e.g. toxic gases, heat and smoke obscuration, in terms of the status of exposed subjects at discrete time intervals. The time at which occupants’ exposure exceeds a threshold criterion represents the time available for escape. Users of ISO 13571:2007 have the flexibility to set such criteria according to their chosen life safety objectives. Thus, an estimated time available for escape might or might not be equivalent to an ASET (available safe escape time).
4.1.2 The quantity and nature of the fire effluent are prime factors in estimating the time available for escape. The effluent nature is a function not only of the product from which it is generated, but also of the conditions under which the product participates in the fire and the nature of the fire.
4.2 Effects of fire effluent on people During and following a fire, the products of combustion can have lethal and sub-lethal effects on occupants of the facility and responders to the fire. The severity of the effects depends on the composition of the effluent, the extent of the exposure and the physical condition of the subject. Information relative to the effects on people can be extracted from physical and chemical characterization of the effluent (e.g. using ISO 13571:2007), from estimation of the toxic potency of fire effluent (e.g. using ISO 13344) or from accidental exposures of people to the chemical and thermal components of the effluent. The effects of the effluent on people are not unique in severity or immediacy, but fall into a distribution. This is due to the range of sensitivity of people to the fire effluent and variations in the progress of a fire. 4.3 Use of fire-effluent data Because the effect of the fire effluent on people depends on factors beyond the combustible(s) as a source of the effluent, it is necessary that the fire-effluent composition data be combined with additional information about the facility, the fire and the people into a fire hazard or risk assessment, rather than being used alone as an indicator of fire hazard or risk