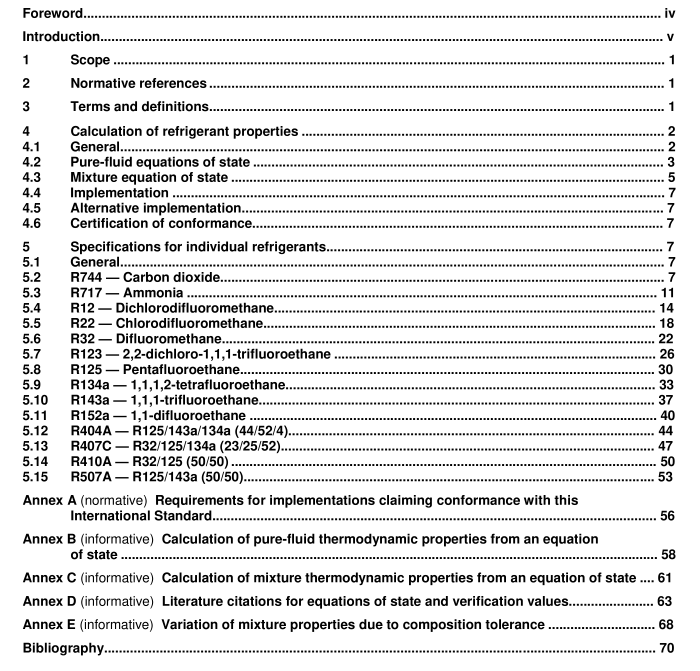 BS ISO 17584 pdf download Refrigerant properties
1Scope
This International Standard specities thermophysical properties of several commonly used refrigerants andrefrigerant blends.
This International Standard is applicable to the refrigerants R12,R22，R32,R123,R125,R134a，R143a,R152a,R717(ammonia), and R744(carbon dioxide) and to the refrigerant blends R404A，R407C，R410A,and R507A. The following properties are included: density, pressure, internal energy, enthalpy, entropy, heatcapacity at constant pressure, heat capacity at constant volume, speed of sound, and the Joule-Thomsoncoefficient, in both single-phase states and along the liquid-vapour saturation boundary.The numericaldesignation of these refrigerants is that defined in lso 817.
Normative references
The following referenced documents are indispensable for the application of this document.For datedreferences,only the edition cited applies. Forundated references,the latest edition of the referenceddocument (including any amendments) applies.
ISO 817,Refrigerants – Designation system
3Terms and definitions
For the purposes of this document, the following terms and definitions apply.
3.1
algorithm
procedure for the computation of refrigerant properties
NOTE An algorithm is most often a computer program.An algorithm may also consist of one or more single-propertycorrelations as allowed under 4.4.
3.2
blend
mixture of two or more chemical compounds3.3
critical point
state at which the properties of the saturated liquid and those of the saturated vapour become equal
NOTE Separate liquid and vapour phases do not exist above the critical point temperature for a pure fluid. This ismore completely referred to as the “gas-liquid critical point” as other “critical points” can be defined.
3.4
equation of state
mathematical equation that is a complete and thermodynamically consistent representation of thethermodynamic properties of a fluid
NOTE An equation of state most commonly expresses pressure or Helmholtz energy as a function of temperature,density，and (for a blend) composition.Other thermodynamic properties are obtained through integration andordifferentiation of the equation of state.
3.5 fluid
refrigerant
substance, present in liquid and/or gaseous states, used for heat transfer in a refrigerating system
NOTE The fluid absorbs heat at a low temperature and low pressure, then releases the heat at a higher temperatureand a higher pressure, usually through a change of state.
3.6
liquid-vapour saturation
state at which liquid and vapour phases of a fluid are in thermodynamic equilibrium with each other at acommon temperature and pressure
NOTESuch states exist from the triple point to the critical point.3.7
transport properties
viscosity , thermal conductivity , and diffusion coefficient
3.8
thermodynamic properties
density,pressure, fugacity, internal energy, enthalpy, entropy, Gibbs and Helmholtz energies, heat capacities,speed of sound, and the Joule-Thomson coefficient, in both single-phase states and along the liquid-vapoursaturation boundary
3.9
thermophysical properties
all of the thermodynamic, transport, and other miscellaneous properties
3.10
triple point
state at which solid, liquid, and vapour phases of a substance are in thermodynamic equilibrium
4Calculation of refrigerant properties
4.1General
This International Standard specifies properties for the refrigerants listed in Clause 1.These properties arederived from experimental measurements. t is not practical, however, to directly reference the experimentaldata; they may not be available at all conditions of interest and some properties, such as entropy, cannot bemeasured directly.Furthermore, a simple tabulation, even for properties (such as vapour pressure) that aredirectly measurable, is not convenient for modern engineering use. Thus, some means to correlate the data isrequired to allow calculation of the properties at a desired thermodynamic state.
The properties enumerated in this International Standard are calculated from specified equations of state,