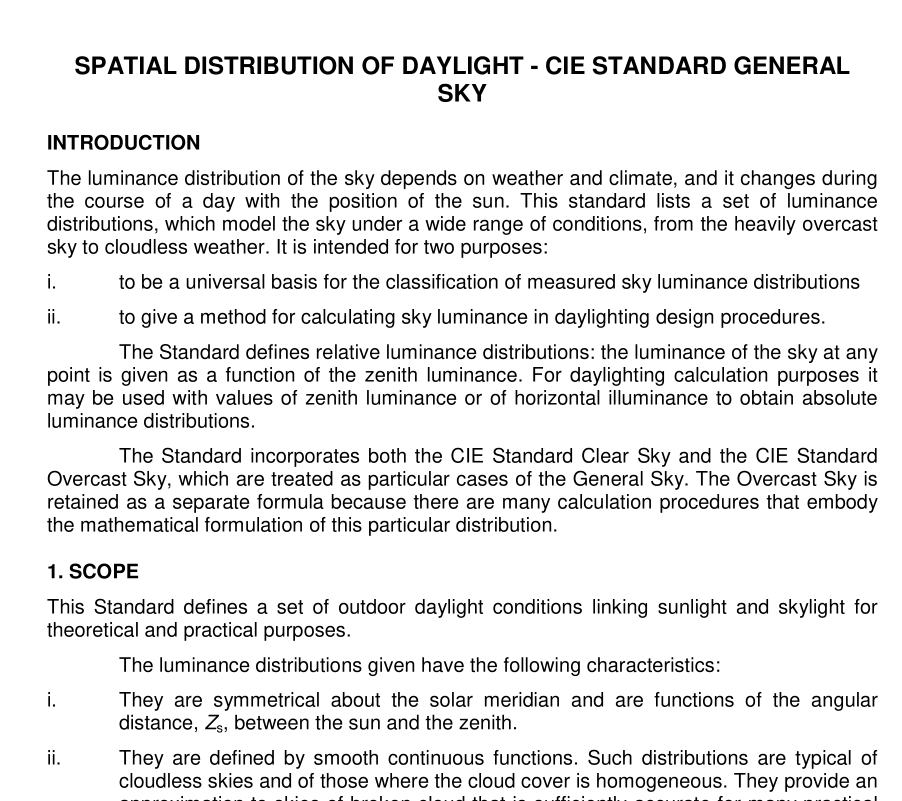 BS ISO 15469 pdf download Spatial distribution of daylight — CIE standard general sky
INTRODUCTION
The luminance distribution of the sky depends on weather and climate, and it changes duringthe course of a day with the position of the sun.This standard lists a set of luminancedistributions,which model the sky under a wide range of conditions, from the heavily overcastsky to cloudless weather. It is intended for two purposes:
to be a universal basis for the classification of measured sky luminance distributions
ii.
to give a method for calculating sky luminance in daylighting design procedures.
The Standard defines relative luminance distributions: the luminance of the sky at any
point is given as a function of the zenith luminance. For daylighting calculation purposes itmay be used with values of zenith luminance or of horizontal illuminance to obtain absoluteluminance distributions.
The Standard incorporates both the CIE Standard Clear Sky and the CIE Standard
Overcast Sky, which are treated as particular cases of the General Sky.The Overcast Sky isretained as a separate formula because there are many calculation procedures that embodythe mathematical formulation of this particular distribution.
1.sCOPE
This Standard defines a set of outdoor daylight conditions linking sunlight and skylight fortheoretical and practical purposes.
The luminance distributions given have the following characteristics:
They are symmetrical about the solar meridian and are functions of the angulardistance,zs, between the sun and the zenith.
ii.
They are defined by smooth continuous functions. Such distributions are typical ofcloudless skies and of those where the cloud cover is homogeneous. They provide anapproximation to skies of broken cloud that is sufficiently accurate for many practicaldaylight calculation purposes.
iii.
The relative luminance at any point in the sky depends on the angle, x, between thatsky element and the sun,and on the angle，Z,between the sky element and thezenith. lt is given in terms of two functions: the relative scattering indicatrix，f(z), andthe luminance gradation between horizon and zenith,oZ).
2. NORMATIVE REFERENCES
The following standards contain provisions，which through reference in the text,constituteprovisions of this standard.At the time of publication, the editions indicated were valid.Allstandards are subject to revision，and parties to agreements based on the Standard areencouraged to investigate the possibility of applying the most recent editions of the standardsindicated below. Members of the CE, IEC and iso maintain registers of currently validinternational standards.
1. CIE17.4-1987 International Lighting Vocabulary, ILV (joint publication lEC/CIE).
2. ISO 31:1992 Quantities and Units,Part 6: Light and Related Electromagnetic Radiations.
3. LIST OF SYMBOLS
For the purposes of this Standard, the following symbols apply:
a, b luminance gradation parameters
? azimuth of a sky element (clockwise from north) [rad]
? s azimuth of the sun (clockwise from north) [rad]
c, d, e scattering indicatrix parameters
? shortest angular distance between a sky element and the sun [rad]
f(?) scattering indicatrix function
?(Z) luminance gradation function
? angle of elevation of a sky element above the horizon [rad]
? s angle of elevation of the sun above the horizon [rad]
L a luminance of a sky element [cd/m 2 ]
L z zenith luminance [cd/m 2 ]
Z angular distance between a sky element and the zenith [rad]
Z s angular distance between the sun and zenith [rad]
For quantities and units see Normative References 1 & 2.