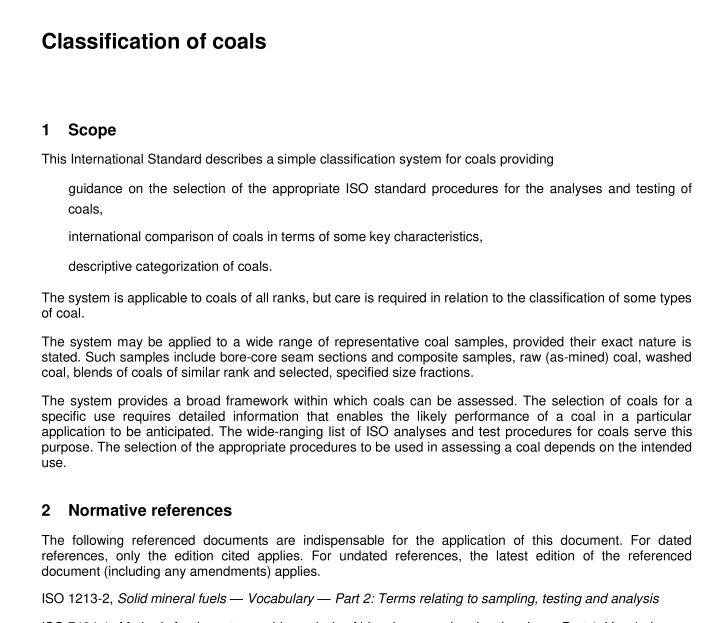 BS ISO 11760 pdf download Classification of coals
1Scope
This International Standard describes a simple classification system for coals providing
guidance on the selection of the appropriate lSO standard procedures for the analyses and testing ofcoals,
international comparison of coals in terms of some key characteristics,descriptive categorization of coals.
The system is applicable to coals of all ranks, but care is required in relation to the classification of some typesof coal.
The system may be applied to a wide range of representative coal samples, provided their exact nature isstated.Such samples include bore-core seam sections and composite samples, raw (as-mined) coal, washedcoal, blends of coals of similar rank and selected, specified size fractions.
The system provides a broad framework within which coals can be assessed. The selection of coals for aspecific use requires detailed information that enables the likely performance of a coal in a particularapplication to be anticipated. The wide-ranging list of lS0 analyses and test procedures for coals serve thispurpose.The selection of the appropriate procedures to be used in assessing a coal depends on the intendeduse.
2Normative references
The following referenced documents are indispensable for the application of this document.For datedreferences，only the edition cited applies. For undated references,the latest edition of the referenceddocument (including any amendments) applies.
ISO 1213-2,Solid mineral fuels — Vocabulary— Part 2:Terms relating to sampling, testing and analysisISO 7404-1,Methods for the petrographic analysis of bituminous coal and anthracite— Part 1: VocabularyISO7404-5，Methods for the petrographic analysis of bituminous coal and anthracite— Part 5: Method ofdetermining microscopically the reflectance of vitrinite
Terms and definitions
For the purposes of this document,the terms and definitions given in lSO 1213-2,ISO 7404-1 and thefollowing apply.
3.1
coal
carbonaceous sedimentary rock largely derived from plant remains with an associated mineral contentcorresponding to an ash yield less than, or equal to, 50 % by mass (dry basis)
NOTE In the geological coalification sequence, the transformation from peat to coal is defined as occurring when thetotal in-situ moisture content has decreased to 75 % by mass. The upper limit for undisturbed coal seams in the normalcoalification process leading to semi-graphite is defined as corresponding to a mean random vitrinite reflectance，Rr, of6,0 % or, preferably, a mean maximum vitrinite reflectance，Rv,max , of 8 %, determined in accordance with ISO 7404-5.The upper limit，Ry,max , for disturbed, contact altered, coals can exceed 10 %; see Table 1, Note 2
3.2
vitrinite
group of macerals with a grey colour (as observed with reflected light under a microscope) and with areflectance generally between that of the associated darker liptinite and lighter inertinite over the rank range inwhich the three respective maceral groups can be readily recognized
NOTE1 In the upper range of medium rank,vitrinite reflectance can be less than that of liptinite (where liptinite isrecognizable) whilst at very high rank (R,>4,0 %), the maximum reflectance of both liptinite and vitrinite may exceed thatof inertinite.
NOTE 2 In medium and high rank coals,vitrinite reflectance measurements should preferably be taken on telovitriniteor, in its absence, on the whole of the vitrinite population.Within low-rank coals, vitrinite reflectance measurements mustbe measured on the submaceral ulminite B, or preferably on Eu-ulminite, if present. Eu-ulminite consists of gelified planttissues with the cell structures weakly visible in reflected white light. uliminite B is the more highly reflecting part ofulminite; see [9].
3.3
inertinite
maceral group that is composed of particles having a reflectance in low and medium-rank coals that is higherthan that of the macerals of the vitrinite and liptinite groups, but is lower than that of the corresponding vitrinitein very high-rank coals
NOTE The reflectance of inertinite macerals begins to be exceeded by that of the macerals of the vitrinite groupwhen the vitrinite and inertinite reflectance，R , has reached about 4 %; see [8].
3.4
liptinite
maceral group that includes sporinite, cutinite, suberinite, resinite, liptodetrinite and alginite
NOTE At low ranks, the reflectance of liptinite macerals is lower than that of vitrinite but converges with that ofvitrinite at medium rank B to A. Liptinite macerals show stronger primary autofluorescence relative to that of macerals fromthe other maceral groups up to medium rank B.
3.5
lignite
brown coal
coal having a mean random vitrinite reflectance，Rr , less than 0,4 %
NOTE The terms “brown coal” and “lignite” are frequently used as alternatives but the latter is the term now preferredby the International Commission for Coal and Organic Petrology; see [10].
3.6
sub-bituminous coal
coal having a mean random vitrinite reflectance，R , equal to or greater than 0,4 % but less than 0,5 %