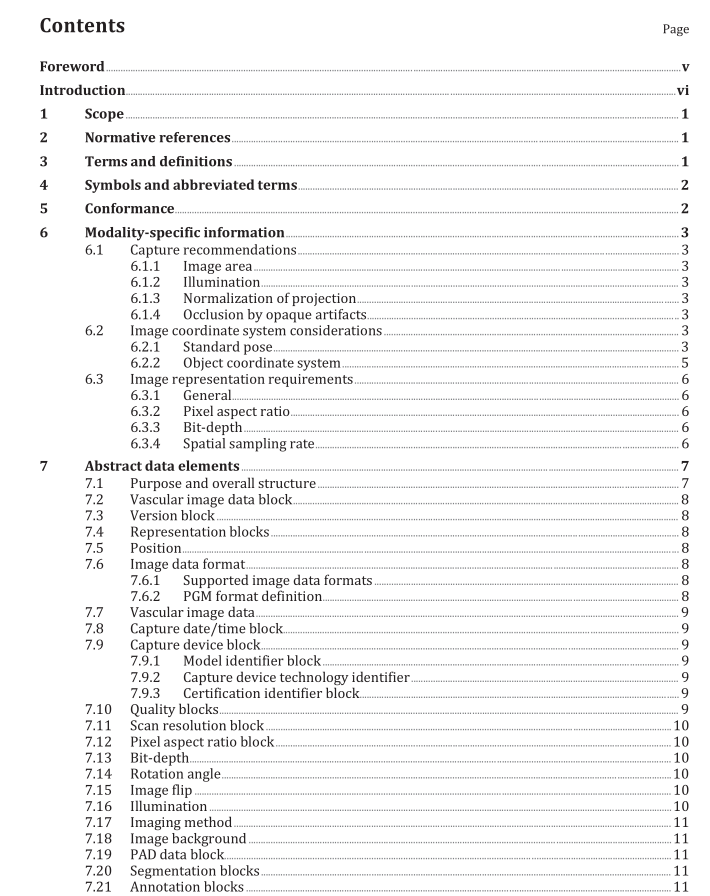 ISO IEC 39794-9 pdf – Information technology — Extensible biometric data interchange formats — Part 9: Vascular image data
6 Modality-specific information
6.1 Capture recommendations
6.1.1 Image area Vascular pattern biometric technologies obtain images from different locations of the human body. The technologies currently available employ images from the finger, back of the hand, and palm side of the hand. The location used for imaging shall be specified in the format. Also, the direction (left/right) of hand and/or finger index (thumb, index, middle, ring, and little) shall be specified. This document reserves fields for future development of technologies potentially using different parts of the human body.
6.1.2 Illumination For the capture of vascular biometric images, the skin is typically illuminated using NIR wavelengths in the range of approximately 700 to 1 200 nm. The angle from the light source to the tangent plane of the skin’s surface is not defined in VIR because technologies that use a reflectance image may use diffuse illumination instead of direct illumination for the purpose of avoiding specular reflectance. Instead, this document specifies that the image is either based on transparency or reflectance of the observed biometric characteristic. Two or more wavelengths of the illumination light source may be specified in the case that multiple different light sources are used for background masking.
6.1.3 Normalization of projection The captured image shall be an orthographic projection of the body area being imaged. If the original raw image is not orthographic to the body area, it shall be converted to an orthographically projected one. Any major geometric distortion caused by the optical system shall also be eliminated prior to creation of the VIR.
6.1.4 Occlusion by opaque artifacts Some opaque artifacts, such as rings, tattoos, bandages, etc., can occlude vascular patterns. Using images including occlusions should be avoided.
6.2 Image coordinate system considerations
6.2.1 Standard pose
6.2.1.1 General This document defines the standard poses for capturing raw images of target body areas. Based on these standard poses, object (target area of the human body) coordinate systems are defined as described in subclause 6.2.2 .
6.2.1.2 Palm The palm area shall not be bent and each finger boundary shall be exposed to the camera. Fingers shall be straight. An example of the standard pose of a palm is shown in Figure 1 . In the standard pose, the camera ’s direction is parallel to the z-axis of the palm coordinate system defined in subclause 6.2.2.2 .
6.2.1.3 Finger The standard pose is a straight finger. For clarity, the “frontal side” is defined as the ventral side of each finger. An example of the standard pose of a finger is shown in Figure 2 .
6.2.1.4 Back of the hand The standard pose for the back of the hand shall be to position the hand with the dorsal side toward the capture device with the tangent plane of the back of the hand in parallel with the image coordinate space to produce an orthographic image of the back of the hand. An example of the standard pose of the back of the hand is shown in Figure 3. In the standard pose, the camera ’s direction is parallel to the z-axis of the back of the hand coordinate system defined in subclause 6.2.2.3.
6.2.1.5 Standard poses for future modalities This document shall reserve standard pose definitions of future technologies that can potentially utilize different parts of the human body.
6.2.2 Object coordinate system 6.2.2.1 General The vascular image header record provides an optional field that specifies the degree of rotation of the vascular image out of the standard pose. To effectively specify the rotation angle, the object (target body) coordinate system for each vascular technology is defined in this subclause. All of the coordinate systems are right-handed Euclidian coordinate systems.