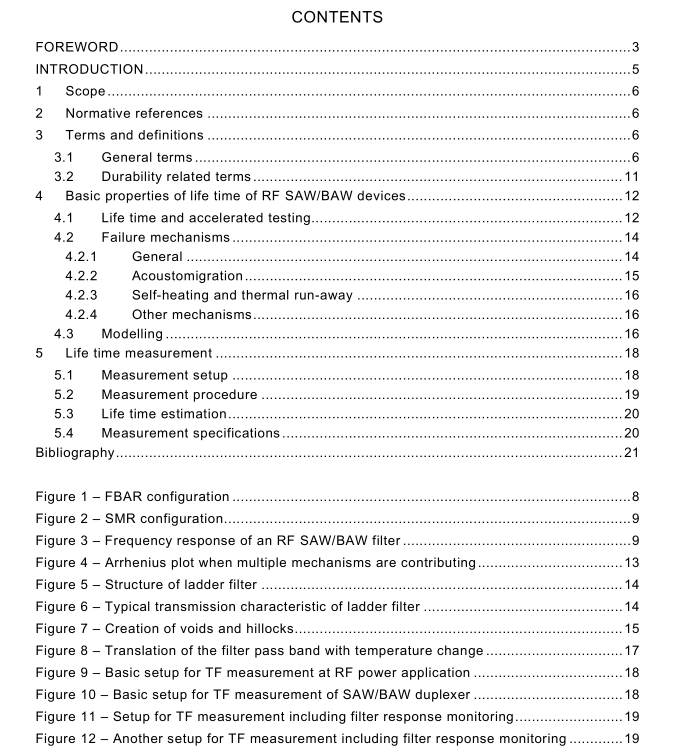 IEC 63155 pdf – Guidelines for the measurement method of power durability for surface acoustic wave (SAW) and bulk acoustic wave (BAW) devices in radio frequency (RF) applications
1 Scope
This document defines the measurement method for the determination of the durability ofradio frequency(RF) surface acoustic wave (SAW) and bulk acoustic wave (BAW) devices,such as filters and duplexers，with respect to high power RF signals，which are used intelecommunications，measuring equipment,radar systems and consumer products.RF BAWdevices include two types: those based on the film bulk acoustic resonator(FBAR) technologyand those based on the solidly mounted resonator (SMR) technology.
This document includes basic properties of failure of RF SAW/BAW devices,and guidelines toset up the measurement system and to establish the procedure to estimate the time to failure(TF).Since TF is mainly governed by the RF power applied in the devices, discussions arefocused on the power durability.
lt is not the aim of this document to explain the theory， or to attempt to cover all theeventualities which can arise in practical circumstances.This document draws attention tosome of the more fundamental questions which will need to be considered by the user beforehelshe places an order for an RF SAW/BAW device for a new application. Such a procedurewill be the users means of preventing unsatisfactory performance related to premature devicefailure resulting from high-power exposure of RF SAW/BAW devices.
2Normative references
There are no normative references in this document.
3Terms and definitions
3.1 General terms
3.1.1
BAw
bulk acoustic wave
acoustic wave, propagating between the top and bottom surface of a piezoelectric structureand then traversing the entire thickness of the piezoelectric bulk
Note 1 to entry: The wave is excited by metal electrodes attached to both sides of the piezoelectric layer.[SouRCE: IEC 62575-1:2015,3.1.1]
3.1.2
BAW filter
bulk acoustic wave filter
filter characterised by a bulk acoustic wave which is usually generated by a pair of electrodesand propagates along a thin film thickness direction
[SOURCE: IEC 62575-1:2015,3.1.2]
3.1.3
cut-off frequency
frequency of the pass band at which the relative attenuation reaches a specified value
[SOURCE: IEC 60862-1:2015，3.1.2.4,modified – The reference to Figure 1 has beendeleted.]
3.1.4
duplexer
device used in the frequency division duplex system, which enables the system to receive andtransmit signal through a common antenna simultaneously
[SOURCE: IEC 62761:2014,3.1.5]
3.1.5
film bulk acoustic resonatorFBAR
thin film BAW resonator consisting of a piezoelectric layer sandwiched between two electrodelayers with stress-free top and bottom surfaces supported mechanically at the edge on asubstrate with cavity structure as shown in Figure 1 or membrane structure as an example
Note 1 to entry: This note applies to the French language only.
[SOURCE: IEC 62575-1:2015,3.1.3,modified – Figure 1 c) has been added.]