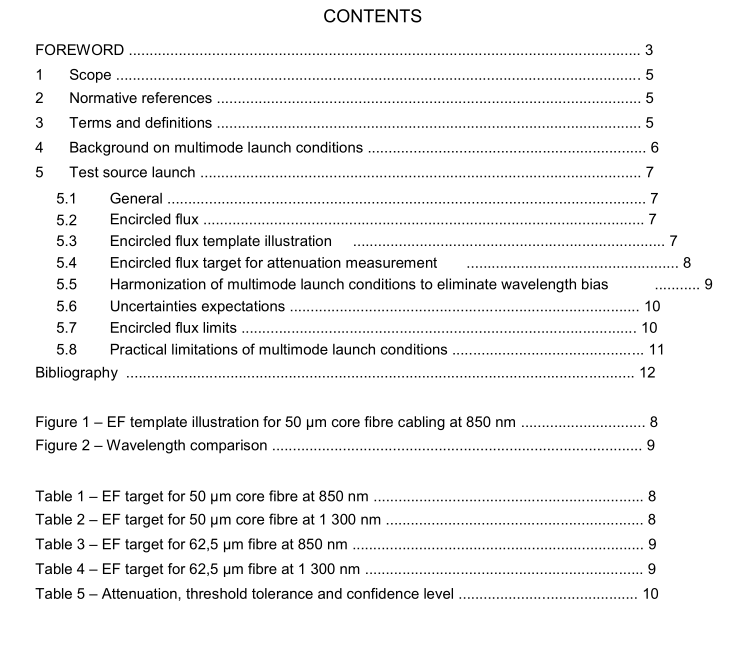 IEC 62614-1 pdf – Fibre optics – Multimode launch conditions – Part 1: Launch condition requirements for measuring multimode attenuation
3.1
encircled fluxEF
fraction of cumulative near-field power to the total output power as a function of radial distancefrom the optical centre of the core
3.2
multimode attenuation
attenuation pertaining to multimode fibres andor multimode fibre components，systems andsubsystems
3.3
reference grade launch cord
launch cords constructed with a reference grade termination at the interface to the device undertest
3.4
reference grade termination
connector and plug with tightened tolerances terminated onto an optical fibre with tightenedtolerances such that the expected attenuation of a connection formed by mating two suchassemblies is lower and more repeatable than a standard-grade termination
Note 1 to entry: An adapter，required to assure the reduced eattenuation，may be considered part of the referencegrade termination where requiredby the test configuration.
Note 2 to entry: IEC 61755-6-2 defines reference grade terminations for 50/125 um fibre.
4Background on multimode launch conditions
There have been a wide range of launch conditions used for testing multimode fibre componentsand systems. Light sources, typically used in measuring attenuation, can produce varying modaldistributions when launched into multimode fibre. These differing modal distributions, combined
with the differential mode attenuation (DMA) inherent in most multimode components,commonly cause measurement variations when measuringattenuation of multimodecomponents. For example, attenuation measurement variations can occur when two similar light
sources or different launch cords are used.
Legacy(LED based) applications had a wide power budget, which in most cases masked thevariance in results between the factory and field measurement.As technology has evolved, the
system requirements for attenuation have become more stringent. Demanding applicationrequirements are driving the need for accurate and reproducible multimode attenuationmeasurements over a variety of field-test instruments. Attenuation measurement experiments,
with different instruments having the same standards compliant set up, produce measurementvariations that are induced by their differing launch conditions.
Experts have concluded that the launch condition should be expressed at the interface between
the test instrument launch cord and the terminated fibre to be tested. That is,the launchcondition should be based in part on the measured near field at the output of the launch cord.
The key to making reproducible attenuation measurements across various sources is tonarrowly constrain the range of power distribution at large radi so that all compliant sourcesproduce closely agreeing attenuation measurement results. This is because the variation in the
allowed power distribution at large radi across different sources translates directly intovariability of attenuation measurements. Smaller power variations enable more reproducibleattenuation measurements.
5Test source launch5.1 General
The source launch conditions are described at the output of the reference grade launch cord. lt is expected that the source and launch cord, as supplied，have been verified by the testequipment manufacturerto produce the specified launch measured accordingtoIEC 61280-1-4. For reference grade fibre，core diameter tolerances of +0,7 um have beenevaluated with some success. Variance of other parameters, such as numerical aperture andcore concentricity, need more study.
5.2Encircled flux
The EF shall be determined from the near field measurement of the light coming from the endof the reference grade launch cord in accordance with lEC 61280-1-4.
The measured near field result is a function of the near field profile,(r), of radius r, away from
the optical centre of the core, and the edge of the near field profile,R, which is used to generate
the EF function as shown in Formula (1):
5.3 Encircled flux template illustration An illustration of an EF template is shown in Figure 1. A target EF value for a set of particular radial control points is defined. Upper and lower limit of EF values for a set of particular radial control points may also be defined. A compliant launch is a launch that falls within the template at the particular radial control points.