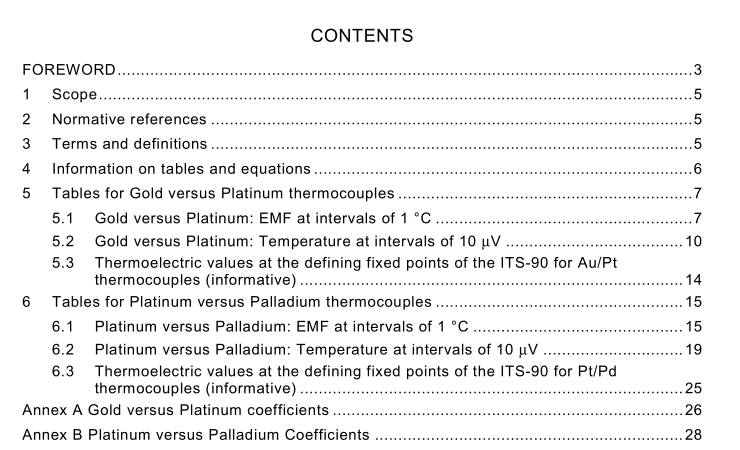 IEC 62460 pdf – Temperature – Electromotive force (EMF) tables for pure-element thermocouple combinations
This International Standard specifies the equations and reference tables relating temperatureto EMF(electro-motive force) for Gold versus Platinum and Platinum versus Palladiumthermocouples. For information and convenience of use it also provides the approximateequations for temperature as functions of EMF.
The tables and equations in this standard are intended for use with thermocouples made fromelements of purity not less than 99.999 % for Platinum and Gold and of 99.99 % forPalladium, by weight.
Tolerances on initial values of EMF versus temperature have not been established for thethermocouples in this standard. Where required, these tolerances should be agreed betweenthe wire manufacturer and the user.
Temperatures in this standard are based on the International Temperature Scale of 1990(ITs-90).They are expressed in degrees Celsius,symbol tgo.Values of EMF, symbol E/uV,are given in microvolts.
This standard does not cover extension or compensating wires for use with the pure-elementthermocouples.The questions of their use shall be agreed between the manufacturer and theuser.
2 Normative references
The following referenced documents are indispensable for the application of this document.For dated references, only the edition cited applies. For undated references, the latest editionof the referenced document (including any amendments) applies.
IEC 60584-1,Thermocouples – Reference tables
Terms and definitions
For the purposes of this document, the terms and definitions given in lEC 60584-1 apply, aswell as the following.
3.1
thermocouple types
the following thermocouple wire types are covered by this standard:. Gold versus Platinum (Au/Pt or Gold/Platinum)
. Platinum versus Palladium (Pt/Pd or Platinum/Palladium)
Following international convention，as in lEC 60584-1，when identifying thermocouples thepositive element/wire is given first.
3.2 thermoelectric values at the ITS-90 fixed points
values are given for the defining triple points (TP), melting points (MP) and freezing points (FP) in the temperature range of the corresponding tables. The Seebeck coefficient S is the first derivative of the EMF with respect to temperature.
4 Information on tables and equations
The following tables are included in this standard:
• Gold versus Platinum: EMF at intervals of 1 °C
• Gold versus Platinum: temperatures at intervals of 1 0μV
• Gold versus Platinum: thermoelectric values at the fixed points of the ITS-90
• Platinum versus Palladium: EMF at intervals of 1 °C
• Platinum versus Palladium: temperatures at intervals of 1 0μV
• Platinum versus Palladium: thermoelectric values at the fixed points of the ITS-90
For the tables in this document, the reference temperature is 0 °C.
The definitive equations of EMF, E/μV, as functions of temperature, t 90 /°C, which are used to generate the tables, are given in Annex A for Gold/Platinum thermocouples and Annex B for
Platinum/Palladium thermocouples. For information and convenience in use, approximate equations are also given, expressing t 90 /°C as functions of E/μV for the respective thermocouples within the stated error limits.