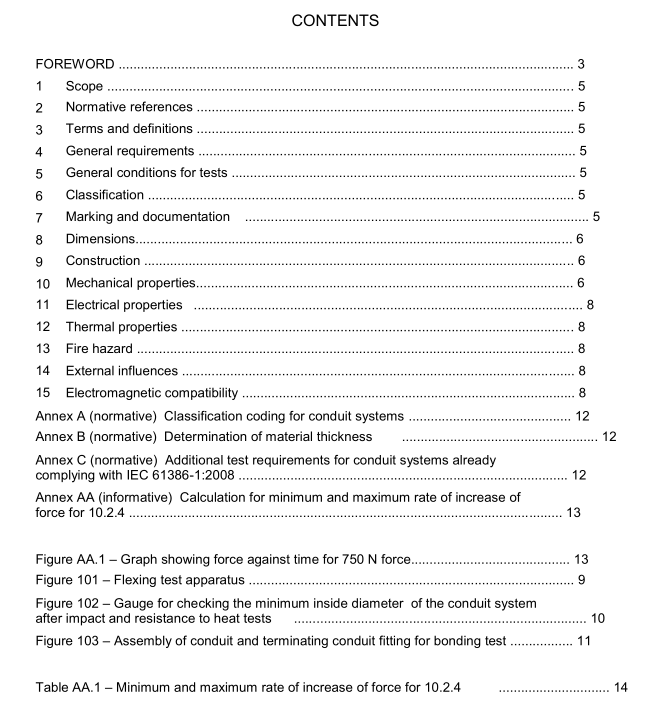 IEC 61386-23 pdf – Conduit systems for cable management – Part 23: Particular requirements – Flexible conduit systems
10.5 Flexing testAddition:
10.5.101 An assembly consisting of a conduit with a terminating conduit fitting, assembled inaccordance with the manufacturers instructions, shall be subjected to a flexing test by meansof the apparatus shown in Figure 101.
10.5.102 The test shall be made on six samples of conduit of an appropriate length. Three of
the samples shall be tested at the minimum declared temperature for transport，applicationand installation as given in Table 1 with a tolerance of t2R℃. The other three samples shallbe tested at the maximum declared application and installation temperature as given inTable 2 with a tolerance of +2 °C.
A manufacturer may declare that a flexible conduit is suitable for transport and installationaccording to Table 1 but may only be suitable for flexing at ambient temperature as aminimum. In this case the test shall be carried out at(20i2)C and the third digit of theclassification code shall be X.The manufacturer shall clearly declare in its literature both theminimum transport and installation temperature in accordance with Table 1,the minimumapplication temperature which is ambient and the maximum installation and applicationtemperature in accordance with Table 2.
10.5.103 The sample shall be fixed to the oscillating member by means of the terminatingconduit fitting as shown in Figure 101,so that when the conduit is at the middle of its travel,the axis of the conduit is vertical and passes through the axis of the oscillation. The apparatus
with the sample shall be conditioned for 2h or until the sample has attained the declaredtemperature, whichever period is the longer.
10.5.104 The oscillating member shall be moved backwards and forwards through a totalangle of (180 ±5)°divided equally about the vertical axis. The assembly shall be subjected to
5 000 flexings at a rate of (40 ± 5j flexings per minute. A flexing constitutes, starting from thevertical position, one continuous cycle of movement of essentially sinusoidal forms.
10.5.105 After the test, the sample shall show no cracks visible to normal or corrected vision
without magnification and it shall be possible to pass the appropriate gauge, as shown inFigure 102, through the sample under its own weight and without any initial speed.
10.6Collapse test
Subclause 10.6 of lEC 61386-1:2008 is not applicable.10.7 Tensile test
Subclause 10.7 of IEC 61386-1:2008 is applicable, except as follows:10.7.3 Replacement:
For conduit systems where tensile strength is not declared,the tensile strength of the jointshall comply with classification 1 in Table 6.
11 Electrical properties
Clause 11 of lEC 61386-1:2008 and of EC 61386-1:2008/AMD1:2017 are applicable,exceptas follows:
11.2Bonding testReplacement :
A sample of a conduit and terminating conduit fitting shall be assembled in accordance withthe manufacturer’s instructions and mounted as shown in Figure 103. A current of 25A,having a frequency of 50 Hz to 60 Hz,derived from an AC source having a no-load voltagenot exceeding 12 V, shall be passed through the assembly for ( 60 +50 ) s. Then the voltagedrop shall be measured between the points shown in Figure 103 and the resistance calculated
from the current and this voltage drop.
The resistance shall not exceed 0,05Q.
12Thermal properties
Clause 12 of lEC 61386-1:2008 is applicable,except as follows:12.3Replacement :
The load is then removed and immediately after its removal it shall be possible to pass theappropriate gauge，in accordance with Figure 102, through the conduit under its own weightand without any initial speed, with the sample in the vertical position.
13 Fire hazard
Clause 13 of lEC 61386-1:2008 and of lEC 61386-1:2008/AMD1:2017 are applicable.
14 External influences
Clause 14 of lEC 61386-1:2008 and of lEC 61386-1:2008/AMD1:2017 are applicable.
15 Electromagnetic compatibility
Clause 15 of lEC 61386-1:2008 and of lEC 61386-1:2008/AMD1:2017 are applicable.