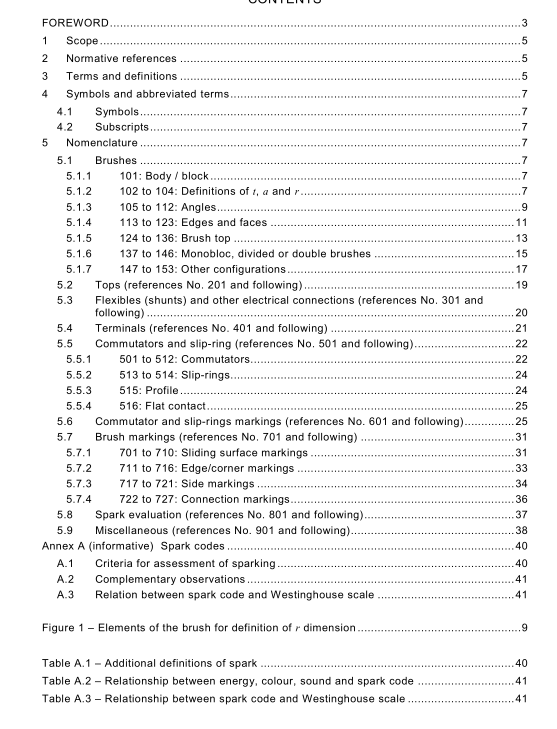 EN IEC 60276 pdf – Carbon brushes, brush holders, commutators and slip-rings – Definitions and nomenclature (IEC 60276:2018)
1 Scope
This document applies to carbon brushes for electrical machinery.For the present, it appliesonly to carbon brushes for commutators and slip-rings in rotating machines.
Terms and definitions are relative to the brush construction (references 100’s to 500’s andparts of 900’s) and to the markings when operating on a rotating machine (references 600’s to800’s).
By extension， terms and definitions may be relevant for any kind of sliding electrical contactsfor electrical machinery.
2Normative references
The following documents are referred to in the text in such a way that some or all of theircontent constitutes requirements of this document. For dated references，only the editioncited applies. For undated references, the latest edition of the referenced document (includingany amendments) applies.
IEC 60136, Dimensions of brushes and brush-holders for electrical machinery
IEC 60773,Test methods and apparatus for measurement of the operational characteristics ofbrushes
3Terms and definitions
For the purposes of this document, the following terms and definitions apply.
Is0 and lEC maintain terminological databases for use in standardization at the followingaddresses:
.IEC Electropedia: available at http://www.electropedia.orgl
. Iso Online browsing platform: available at http://www.iso.orglobpNOTE Brushes are classified according to the class of grade used, as follows.3.1
grade
brush material used for the brush body, defined by its composition and its physical properties
3.2
carbon
consists of various forms of amorphous carbon，generally made of a mixture ofcarbonaceous powders agglomerated with a binder，moulded and baked at suitabletemperature to carbonize the binder
Note 1 to entry: Also named hard carbon (or plain carbon).
3.3
carbon-graphitecarbographiticcG
consists of a mixture of powdered amorphous carbon and graphite, agglomerated with abinder (pitch or resin), moulded and baked at suitable temperature to carbonize the binder
3.4
electrographiteelectrographiticEG
consists of various forms of amorphous carbon (hard carbon or carbon-graphite) convertedduring manufacture into artificial l synthetic graphite
3.5
natural-graphiteNG
carbon-graphite grade consisting principally of natural graphite
Note 1 to entry: Sometimes also called soft graphite.
3.6
resin-bondedbakelite-graphiteBG
consists of powdered carbon and/or graphite bonded with a resin (artificial,synthetic ornatural) and polymerized at suitable temperature
3.7
metal-graphitemetallographiticMG
consists of a mixture of powdered metals and graphite pressed and baked at suitabletemperature
Note 1 to entry: Baking is named sintering when a reducing atmosphere is used during baking.3.8
metal-impregnatedM
consists of carbon, carbon-graphite or electrographite which contains a metal which has beenadded by an impregnation process.
Metal can be added by:
– melting the metal and impregnating under pressure, or
impregnating with a metal precursor and decomposition of this precursor during a furtherbaking operation, or
– deposition in vapour phase.
Note 1 to entry: The second and third processes are also called metallization.