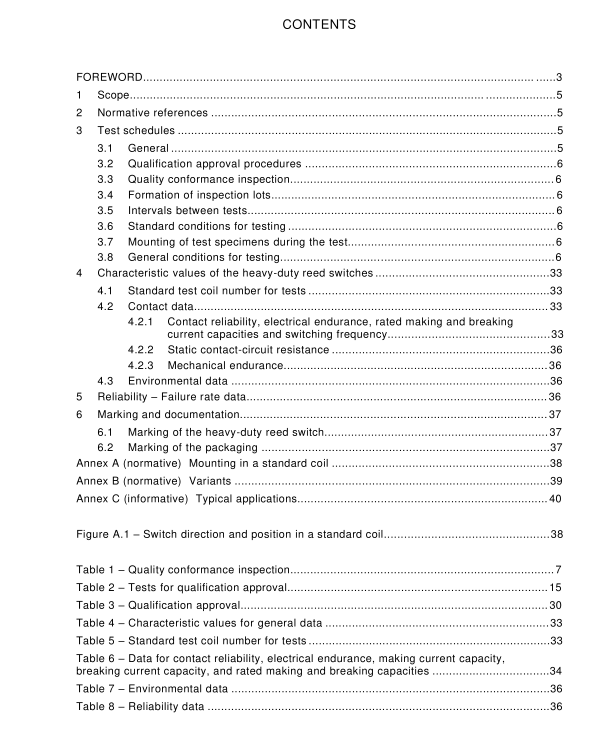 DD IEC PAS 62246-2-1 pdf – Reed contact units — Part 2-1: Heavy-duty reed switches – Quality assessment specification
This PAS defines requirements and tests for heavy-duty reed switches intended to beincorporated into devices that can be used in various industrial applications.
This PAS is to be used in conjunction with IEC 62246-2.
This PAS selects from lEC 62246-2 and from other sources the appropriate test procedures tobe used in detail specifications derived from this PAS.
Two different product variants (variant A and variant B) are specified depending oncharacteristic values and tests (see Annex B).
2Normative references
The following referenced documents are indispensable for the application of this document.For dated references, only the edition cited applies. For undated references, the latest editionof the referenced document (including any amendments) applies.
IEc 60068-2-11(1981): Environmental testing – Part 2 : Tests.Test Ka: Salt mist
IEC 60068-2-14(1984): Environmental testing – Part 2:Tests.Test N: Change of temperature
IEC 60068-2-20 (1979): Environmental testing.Part 2:Tests.Test T: Soldering Amendment 2 (1987)
IEC 60068-2-21(2006): Environmental testing – Part 2-21: Tests – Test U: Robustness ofterminations and integral mounting devices
IEC 60068-2-29 (1987):Environmental testing.Part 2:Tests.Test Eb and guidance: Bump
IEC 60068-2-78 (2001): Environmental testing – Part 2-78: Tests – Test Cab: Damp heat,steady state
IEC60127-2(2003): Miniature fuses – Part 2: Cartridge fuse-links
IEC 61373 (1999): Railway applications – Rolling stock equipment – Shock and vibration tests
IEC 62246-1(2002): Reed contact units – Part 1 : Generic specification
IEC 62246-2(2007): Reed contact units – Part 2: Heavy-duty reed switches
Test schedules
3.1General
Test procedures are referenced in the corresponding subclauses of lEC 62246-2.
3.2 Qualification approval procedures
Qualification approval procedures are indicated in Table 2 and Table 3:
– sampling and test schedule are specified in Table 2 and Table 3;
– the tests specified and their order is mandatory;
– tests stated in Table 2 are mandatory for the variants except when otherwise specified;
– tests stated in Table 3 are mandatory only for the variants indicated.
3.3 Quality conformance inspection
Quality conformance inspection contains the tests stated in Table 1 :
– Group A: routine tests;
– Groups A and B: lot-by-lot tests;
– Group C: periodic tests.
Unless otherwise stated in this PAS, all tests of Table 1 are mandatory.
Where a subgroup contains cumulative tests, the order of the tests is mandatory. Specimens that have been subjected to tests denoted as destructive (D) shall not be released for delivery.
Specimens that have been subjected to tests denoted as non-destructive (ND) are permitted to be released for delivery.
3.4 Formation of inspection lots The basis for determination of sample size for the quality conformance inspection is the heavy-duty reed switch quantity produced during one month.
3.5 Intervals between tests
The following are the intervals necessary between tests:
– Subgroup A0: at shipment;
– Subgroups A4 and B1 : at least once a month;
– Subgroup C1 : at least once a year;
– Subgroup C4: at least once every two years.
3.6 Standard conditions for testing
If not otherwise stated, all tests shall be performed under standard conditions for testing according to 3.3 of IEC 62246-1 .
3.7 Mounting of test specimens during the test
The following requirement shall apply for shock and vibration tests:
The heavy-duty reed switch shall be mounted by its normal mounting method to the test
fixture, where inherent resonances have been minimized so as not to invalidate the test.
3.8 General conditions for testing
Unless otherwise stated, the test coil number and when applicable its polarity specified in Table 5 shall be used for all tests. Unless otherwise stated in this PAS, the polarity shall be
as specified by the manufacturer.