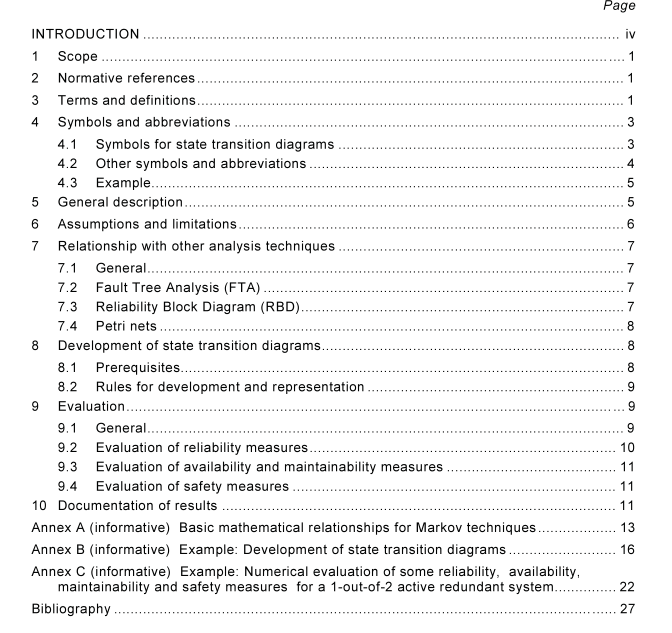 AS IEC 61165 pdf – Application of Markov techniques
5 General description The Markov techniques make use of a state transition diagram which is a representation of the reliability, availability, maintainability or safety behaviours of a system, from which system performance measures can be calculated. It models the system’s behaviour with respect to time. In this standard, a system is regarded as a number of elements, each of which can assume only one of two states: up or down. The system as a whole, however, can assume many different states, each being determined by the particular combination of functioning and failed elements. Thus as an element fails or is restored, the system “moves” from one state to another state. This kind of model is generally called a discrete-state, continuous time model.
Markov techniques are especially suited to the investigation of systems with redundancy, or to systems where system failure depends on sequential events, or to systems for which the maintenance strategies are complex, e.g. systems with restoration priorities or multiple restoration teams, queuing problems, and resource restrictions. The analyst should ensure that the model adequately reflects the operation of the real system with respect to maintenance strategies and policies. In particular the suitability of exponential distributions for the modelling of restoration times must be reviewed.
It should be noted that when redundant repairable systems are modelled with limited repair capacity then due to the memory-less property of the model the actual repair time can be overrepresented, see Figure B.9 for an example. Provided the assumptions and limitations described in Clause 6 can be accepted, one of the major advantages of Markov techniques is that maintenance strategies, for example restoration priorities of individual elements, can be modelled. Moreover, the order in which multiple failures occur can be considered in the model.
It should be noted that other analysis techniques e.g. fault tree analysis (FTA) and reliability block diagram (RBD) methods (as described in IEC 61 025 and IEC 61 078 respectively) do not allow complex maintenance strategies to be taken into account, though they may have special gates represented by special symbols (dynamic gates) to indicate the presence of those cases. However, the effect of those gates has to be evaluated separately by Markov techniques or other techniques, and the results included in the analysis of the Fault Tree or RBD, whilst observing the possible limitations. Although Markov techniques, from a theoretical viewpoint, are flexible and versatile, special precautions are necessary to deal with the difficulties of practical applications. The main problem is that the number of system states and possible transitions increases rapidly with the number of elements in the system. The larger the number of states and transitions, the more likely is it that there will be errors and misrepresentations. To reduce this risk, it is advisable that certain rules be followed in designing the state transition diagram (see clause 8).
Also the numerical techniques used for the evaluation of the diagram can be time consuming and may require special computer programs. Not only are Markov techniques suited to the modelling of maintenance strategies, but such methods enable the failure/restoration events to be modelled in a pictorial way, which is in itself a valuable feature.
The process of failure/restoration is represented by transitions from one state symbol to another in the array of state symbols which together constitute the system state transition diagram. As the number of possible states is finite, the sum of all the state probabilities is unity, i.e. at any instant in time the system can be in one – and only one – of the states in the state transition diagram. If, for practical reasons, states with very low probability are omitted, then the sum of all state probabilities is only approximately one. The modelling techniques described can also be applied to systems where some or all of the elements are not restored. Note that a system with non-restorable elements can be regarded as a special case of a system with restorable elements where the restoration rates are zero (or restoration times are infinite).
6 Assumptions and limitations The rules given in 8.2 of this standard, for generating the state transition diagram, apply generally (apart from rule h).