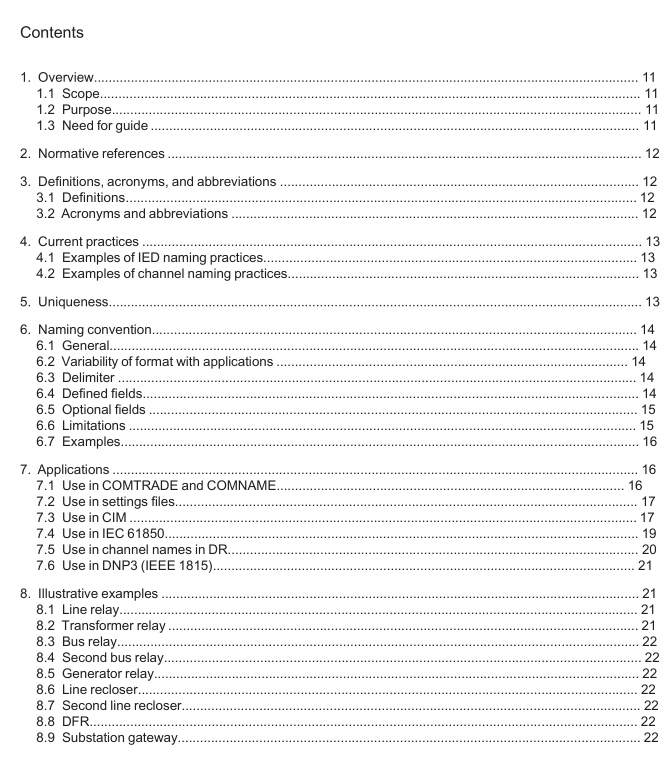 IEEE Std C37.248 pdf download IEEE Guide for Common Format for Naming Intelligent Electronic Devices (COMDEV)
6. Naming convention6.1 General
The convention described here defines the fields identified to uniquely name an installed IED.This conventioncould be used to also name the lED channels (both analog and digital). Information from lEEE Std C37.2TM.2008 (as summarized in Annex B), IEC 61850 [B3] and IEC 81346 [B5] (as summarized in Annex C), andIEEE Std C37.111 TM-2013 (as summarized in Annex D) were used in arriving at this proposed namingconvention. The intent is to produce a humanly understood name with little effort from which relevantinformation can be extracted, both with as-low-as-possible chance of error.
6.2 Variability of format with applications
The convention for naming lEDs constitutes a wide array of devices and applications where the names areneeded.
Theoretically, an lED can be composed of one channel (such as a temperature monitor) or can contain multiplechannels (such as a numerical relay used for feeder or transformer protection).An IED can contain an unlimitednumber of channels (such as substation automation systems including data concentrators and gateway systemsused to combine channels from multiple IEDs and form large composite records for a specific substationor even region).To that extent, the lED name may become far removed from the physical locations of its
channels. The lED name may become as small as a single attribute or field (such as company name), whichmeans the burden is then on the channel name to specify all of the remaining fields needed for the user toidentify the actual system component that is being sensed or monitored.
For the example of a DFR, the relationship between the IED name and the channel name is dynamic; however,the combination “IED name + channel name” should always comprise a unique sequence that identifies thespecific component being monitored.
Many of the applications where names are needed already allow for company name and station identifier.Some applications have identifiers for many of the other quantities that comprise the IED name. To avoidredundancy and preserve space in file names, the lED name can vary from application to application as long asit is understood that the quantities missing from the IED name are available in other places in the application.Clause 7 addresses many of the applications where an IED name is used.
Although many quantities have been identified to name an lED, the instance of many of thequantities actually used together is rare.
6.3 Delimiter
To separate the various parameters for parsing, a delimiter is required.Underscore(_)is chosen asthe delimiter in order to minimize conflicts with known applications.
6.4 Defined fields
The fields that are defined to uniquely identify a channel of a physical or virtual device(IED name +channel name) are:
Company Name _ Station ldentifier _ IED Type _ Function Type _ Voltage Level _ Equipment Name _Phase lD_ lnput Type
where
Company (or Owner)Name is the identification of the company owning the lED.
Station (or Location) ldentifier is the identification of the substation containing the lED or location ofthe lED if not located in a substation.
IED Type is the type of the lED(such as a numerical relay,DFR, data concentrator, or virtual device). It shouldbe unique within the substation or protection scheme.For instance, if two A21 relays are used to protect afeeder, one lED Type could be A21A, the otherA21B.
Function Type is the lEEE C37.2 function designation for the device and may also include additionalinformation, such as first or second line protection (primary or backup).Refer to Annex B for details such asmulti-function devices.
Voltage Level is the kV or a company’s nomenclature for the voltage level(s) of the item(s) being monitoredby the IED channels.For example, some companies use letters for voltage classes such as x, which represents345kv.where multiple voltage levels are represented such as for a transformer, a dash (-)should be used as thedelimiter where permitted by the application.
Equipment Name is the item being protected or monitored by the lED or channel. This istypically a line, breaker, transformer, or generator name.
Phase lD is the identification of the phase(s) or control circuit being monitored. In many instances, this valueis fixed by the manufacturer, and users have no control over this quantity.Where this field is user specified andis a phase quantity, example values are:
IA, lB,IC,IR,IG, VA, VB, VC, VAB, VBC, VCA(or VAC, VCB,VBA),Vo,3Volnput Type or signal type for analog channels is formatted as follows:
=Periodic, alternating input such as three phase currents and voltagesA=Aperiodic, direct input such as frequency, temperature,and trip coil current
6.5 Optional fields
Any other optional fields could be added at the end of the lED name:User 1 _ User 2 _ User 3 and so on
Possible optional fields include Relay House,Relay Panel, Latitude, Longitude, and Time. Time does notmake sense in a device/channel name; however,it is useful in certain instances, such as in a settings file namefor the lED to allow for different versions of a settings file.