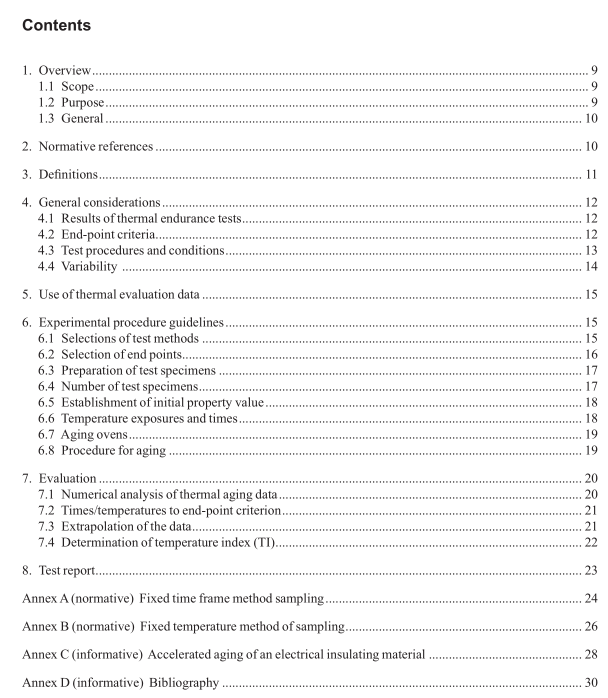 IEEE Std 98 pdf download IEEE Standard for the Preparation of Test Procedures for the Thermal Evaluation of Solid Electrical Insulating Materials
Relative temperature index (RTI), which establishes the temperature index value by comparison of theperformance of a new material to the performance of the same property of a known material.For RTI,there is no preselected time coordinate; the correlation time is determined based on the results of theknown material under laboratory conditions.
Both Tl and RTI are long-term thermal aging(LTTA) methodologies.
1.3 General
TI ratings are a means to compare long-term performance of materials when exposed to heat. TI ratings areassigned by performing the appropriate LTTA test on a material. The test results are plotted, and using thecalculation method presented in IEEE Std 101, the TI rating is assigned by projecting to a preselected timecoordinate.2
RTI ratings are a means to compare the long-term performance of materials when exposed to heat.RTI ratingsare assigned by performing the appropriate LTTA test on a material.The test results of the candidate materialsare compared to the performance of a known or reference material; hence the use of the word “relative.”Thetest results are plotted, and using the calculation method presented in IEEE Std 101, the RTI rating is assignedfor the comparison.ForRTI, there cannot be a preselected time coordinate as the time coordinate is establishedfrom the test results of the known or reference material.
A TI rating is assigned to a new EIM or a modification having no known relative comparison;whereas a RTl isassigned for a modification of an existing EIM wherein performance is well known.While a TI or RTI ratinggives guidance on materials, it should not be taken to predict the relationship between temperature and life ofan insulating material in service.
Thermal endurance tests provide a means for determining the rate at which important properties of insulat-ing materials deteriorate irreversibly as a function of temperature and time. Such tests and the TI/RTI ratingderived aid in selecting insulating materials for use in electrical equipment operating under a wide variety ofservice conditions.
The mechanical, chemical, and electrical properties of the materials when new should be evaluated separatelyby test methods not within the scope of thermal endurance test procedures. The properties as determined mayindicate that one or more, or a combination of these will be the limiting factor in a particular application ratherthan thermal endurance.
Adistinction between material tests and test to evaluate the performance of electrical insulation systems(EIS)is necessary because the details of the particular use of a material may not be known to its manufacturer.Because insulating materials are often used as EIS in combinations, test procedures should be developed toevaluate these combinations. General principles for designating the thermal capabilities of ElS are given inIEEE Std 1 [B4]with additional information on the topic in IEEE Std 99 [B5].’ For information on acceleratedthermal aging, refer to Annex C.
2. Normative references
The following referenced documents are indispensable for the application of this document (i.e., they mustbe understood and used, so each referenced document is cited in text and its relationship to this document isexplained).For dated references, only the edition cited applies.For undated references, the latest edition of thereferenced document (including any amendments or corrigenda) applies.
3. Definitions
For the purposes of this document, the following terms and definitions apply. The IEEE Standards DictionaryOnline should be consulted for terms not defined in this clause.?
destructive test: A test that results in the failure or breakdown of the test specimen.
diagnostic test: A test applied to a test specimen to determine if a measurable amount of thermal degradationhas occurred.
non-destructive test: A test that is not known to cause any alteration, modification, or change to the materialunder test.
proof test: A test that is expected to result in measuring a breakdown or failure of the electrical insulation aftera preselected level of decomposition of the insulation has occurred.
relative temperature index (RTI) : The number expressed in degrees Celsius (C) that corresponds to thecalculated temperature index of the new (candidate) material when the performance of the candidate materialis compared to an established material.
temperature index (TI): The number that corresponds to the temperature in degrees Celsius (C) presentedgraphically but calculated mathematically from the thermal endurance relationship of an electrical insulatingmaterial at a specific preselected time.
temperature to failure: In the case of destructive tests using the fixed time frame method, this is the tempera-ture on the aging curve from the plotted data at which the aging data crosses the end-point line.
thermal capability: The ability to withstand without failure the maximum short-time operating temperatureand the long-time integrated degradative effect of temperature and time.