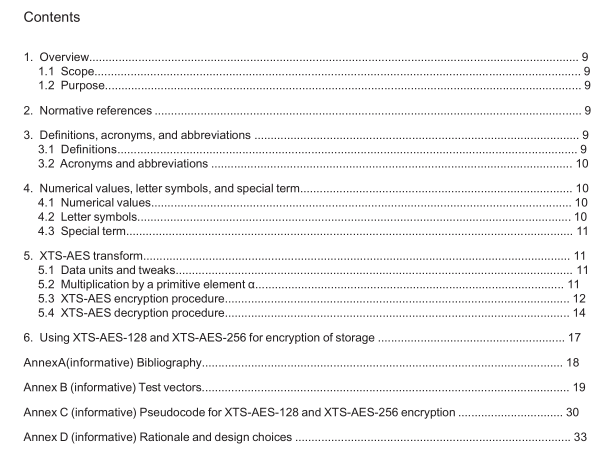 IEEE Std 1619 pdf download IEEE Standard for Cryptographic Protection of Data on Block- Oriented Storage Devices
4.3 Special term
Data unit:Within lEEE Std 1619TM”,128 or more bits of data within a key scope.The first data unit in a keyscope starts with the first bit of the key scope; each subsequent data unit starts with the bit after the end of theprevious data unit. Data units within a key scope are of equal sizes.Adata unit does not necessarily correspondto a physical or logical block on the storage device.
5.XTS-AES transform
5.1 Data units and tweaks
This standard applies to encryption of a data stream divided into consecutive equal-size data units, where thedata stream refers to the information that has to be encrypted and stored on the storage device. Information thatis not to be encrypted is considered to be outside of the data stream.
The data unit size shall be at least 128 b.Data unit should be divided into 128-b blocks. Last part of the dataunit might be shorter than 128 b.The total number of 128-b blocks shall not exceed 2%4.The number of 128-bblocks within the data unit shall not exceed 22.A compliant implementation shall support ciphertext stealingif it also supports data unit sizes that are not multiples of 128 b.Each data unit is assigned a tweak value thatis a nonnegative integer. The tweak values are assigned consecutively, starting from an arbitrary nonnegativeinteger.When encrypting a tweak value using AES, the tweak is first converted into a little-endian byte array.For example, tweak value 123456789a1o corresponds to byte array 9avs,7816,5616,3416,1216.
The mapping between the data unit and the transfer, placement, and composition of data on the storage deviceis beyond the scope of this standard. Devices compliant with this standard should include documentationdescribing this mapping. In particular, a single data unit does not necessarily correspond to a single logicalblock on the storage device.For example, several logical blocks might correspond to a single data unit. Datastream, as used in this standard, does not necessarily refer to all of the bits sent to be stored in the storagedevice.For example, if only part of a logical block is encrypted, only the encrypted bytes are viewed as thedata stream, i.e., input to the encryption algorithm in this standard.
5.2 Multiplication by a primitive element a
The encryption procedure (see 5.3) and decryption procedure (see 5.4) use multiplication of a 16-Bvalue (the result of AES encryption or decryption) byj-th power of a, a primitive element of GF(2128).The input value is first converted into a byte array ao[k],k = 0,1,…15 . in particular, the 16-Bresult of AES encryption or