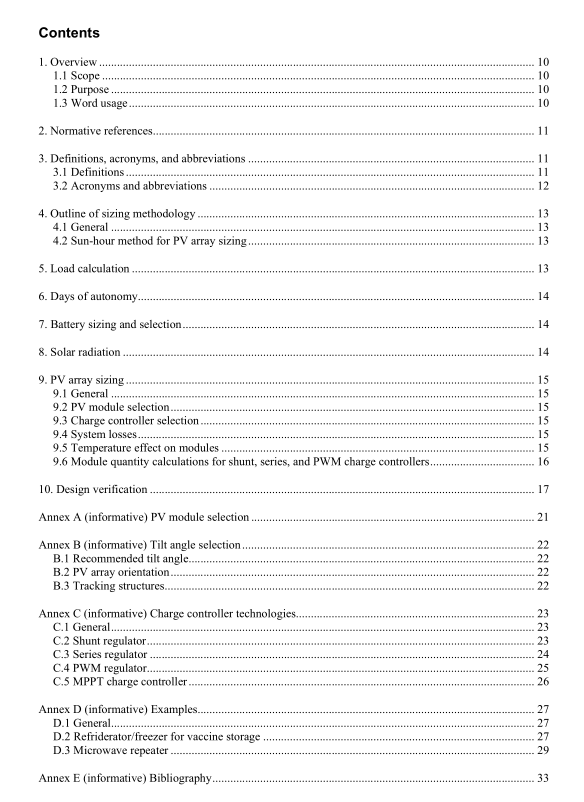 IEEE Std 1562 pdf download IEEE Recommended Practice for Sizing of Stand-Alone Photovoltaic (PV) Systems
4.Outline of sizing methodology
4.1 General
Part of the process of sizing of a stand-alone photovoltaic(PV) system is to determine the required numberof PV modules and the capacity of the battery. Other sizing aspects include wire, charge controllers, inverters,etc., which are beyond the scope of this document. The sizing is based on a combination of worst-case solarradiation, load consumption, and system losses. (Ambient temperature is also used when sizing maximumpower point tracker (MPPT) charge controllers.) This is different than sizing hybrid or grid-connectedsystems, where the PV array may be sized to help maximize solar energy production on an annual basis.
The PV array is sized to replace the ampere-hours (Ah) in the battery consumed by the load and to providesufficient energy to overcome system losses and inefficiencies.Any additional over-sizing of the PV array isused to recharge the battery faster after periods of low solar radiation.
Two different sizing methodologies are used in this recommended practice, both based on the average dailyload in Ah.The methodology used depends on the type of charge controller in the system.(Refer to Annex Cfor more information on charge controller types.)
Module temperature deratings are considered for determining the required number of series modules and Whproduction from PV arrays using MPPT charge controllers, as the temperature has a great effect on theoperating voltage (and therefore power output) of a Pv module.
Shading of the PV array is not addressed, and it is assumed that the PV array will not be shaded throughoutthe day. If the PV array is shaded, a computer model may be needed to determine the effect of shading onthe output of the Pv array.
The performance of PV systems is directly dependent on the accuracy of the solar radiation data and the loadconsumption data used. Inaccuracies in either of these pieces of information will cause the system to be over-or under-designed.
The criticality of the application or load availability is also important. If the load is not critical and a loss ofload can be tolerated, then the system can be designed more cost effectively than a critical system that requiresextremely high system availability.
4.2 Sun-hour method for PV array sizing
For the purposes of this document, the daily module output is estimated by converting the solar radiation dataon the plane of array(POA) into the equivalent number of sun hours of standard full solar irradiance at1 kW/m’.For shunt, series, and pulse-width modulation (PWM) regulators,multiplying the number of sunhours times the rated module peak power current (from the PV module datasheet) gives an estimate of theaverage available Ah/day production from the PV array. For MPPT controllers, multiplying the number ofsun hours times the module peak power after temperature derate gives an estimate of the average availableWh/day production from the PV array. The sun-hour method for PV array sizing is used in this document forsizing the PV array.
5.Load calculation
One of the most critical factors in properly sizing a stand-alone PV system is properly determining the load.If the actual load is greater than the estimated load used for sizing, the system will be under-designed. If theactual load is smaller, the system may be over-designed.
6. Days of autonomy As the array is sized to replace the Ah used by the load and system losses, the battery is sized to support the load during times of low solar radiation. Battery capacity has a large effect on system availability. The larger the battery, the more days of backup, and typically the greater the system availability. There is a balance however with lead-acid batteries; the larger the battery, the greater the risk of sulfation.
As the battery can operate at a low state of charge (SOC) for long periods of time (also called deficit charge), this risk can be reduced by increasing the A:L so that the PV array can recharge the battery at a higher rate; but this also increases the cost of the system. Conversely, a smaller battery will deep cycle more frequently, reducing availability and battery life.
The following is a general recommendation for determining the number of days of autonomy. For non- critical loads and areas with high solar irradiance, five to seven days of autonomy are recommended. 9 For critical loads or areas with low solar irradiance, seven to 14 days of autonomy or greater should be used.