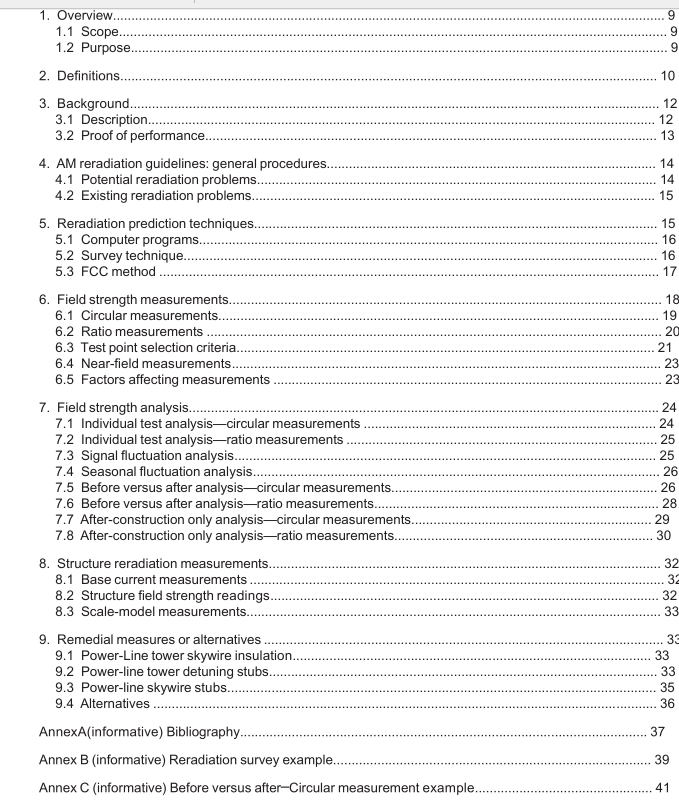 IEEE Std 1260 pdf download IEEE Guide on the Prediction, Measurement, and Analysis of AM Broadcast Reradiation by Power Lines
3. Background
3.1 Description
An AM broadcast array is carefully constructed to radiate strongly towards local listening areas and weaklyin directions where interference to other stations could result. The strong signals are contained in a major lobedirected toward the local listening area. Other smaller listening areas can be serviced with minor lobes. Thedirections of weak signals, called nulls, generally are towards areas without listeners, or towards other stationsoperating at the same frequency (co-channel), at the next highest or lowest frequency (adjacent channel), or atfrequencies two channels away (second adjacent channel). The signal shall be weak towards these stations soas to limit the interference to acceptable levels.
As the electromagnetic waves emanating from the radio station travel outward from the antenna array, theymay meet various manmade structures containing metal. The passing waves induce electric currents to flow inthe metal.These induced currents radiate their own electromagnetic waves at the same frequency as the radiostation. The waves produced by the induced currents are called reradiation. The reradiating waves may alterthe effective far-field pattern of the AM station.A decrease in received signal can mean a loss of listeners forthe station, while an increase can cause the pattern to exceed its allowable limit in certain directions.
Vertical structures are most effective at reradiation when they are close to a quarter wavelength (N/4) tallThe AM broadcast band of 535-1705 kHz results in corresponding N4 heights of 140 m to 44 m.This rangeof heights includes many buildings, transmission line structures, antenna towers,wood poles with verticalground wires, and even down guys without series insulators. Horizontal structures, such as power lines, alsocan reradiate signals by picking up current on their tower-skywire-tower loops.
In the case of a power line, reradiation is directly proportional to the AM radio frequency currents in its towersand overhead ground wires. These currents are dependent on the wavelength, tower design, and tower spans. Ifa loop consisting of two towers, the span between them (provided at least one overhead ground wire is present),and the ground image is a multiple of the wavelength of the AM station, then a resonance may be set up thatcauses a high current to flow.As an example, 50 m tall towers with a 200 m span give a loop length of 500 m,which is 2入 for a 1.2 MHz signal. The loop distance to the second or third tower over can also be of concern.
For power lines without skywires, the tower height in wavelengths and the shape become the prime factors.The electrical height of a tower is typically 15% higher than the physical height due to the top-loading effectof the conductor crossarms.As quarter-wavelengths of AM stations are 44 m to 140 m, there is great potentialfor resonant towers.
The effective radius of a structure strongly affects the radiation resistance and, therefore, the efficiency ofthe tower as an antenna.For steel towers, the effective radius is typically 3 m to 4 m.For wood pole lines, theeffective radius of the grounding wire is as little as 0.01 m, resulting in a higher radiation resistance, lowerparasitic current, and less reradiation.
Computer programs can beused to predict the effect of reradiation onAM broadcast antenna patterns.Moment-method programs are the most rigorous, with structures modeled as collections of wire segments. The currentin each segment is approximated by a set of current distributions, which are solved to satisfy the boundary conditions. The number of towers and skywires that can be simulated is limited due to the complexity of the problem and limitations in minimum wire separation, computing speed, and computer memory. Transmission- line programs are simpler.
The skywire and its image in ground are treated as a transmission line. Current is induced into this transmission line by the incident signal and redistributed according to the tower and skywire impedances. Many more towers and power lines can be modeled using the transmission line method. Analysis using moment method computer modeling does not require the potentially affected AM station to be operating at the time of analysis. Accordingly, even if an AM station is silent, a tower proponent can and should utilize moment method modeling to assess whether the proposed construction or modification will affect the AM station’s pattern. Both field strength measurements and detuning, however, can only be done when an AM station is operating with its licensed parameters.
4 Standards and procedures have been issued and developed by the countries that signed the North American Regional Broadcasting Agreement (NARBA). Computer programs are helpful in indicating which situations might cause interference and which structures would be ideal candidates for remedial measures. Parasitic current often is seen during the construction phase of a new power line near a high-power antenna array. The construction crane, tower segments, and workers can create a resonant loop, causing high levels of radio frequency (RF) current to flow. This can cause serious RF burns to a worker. Likewise, the presence of detuning stubs on a tower can cause high levels of RF current to flow, creating a safety hazard.