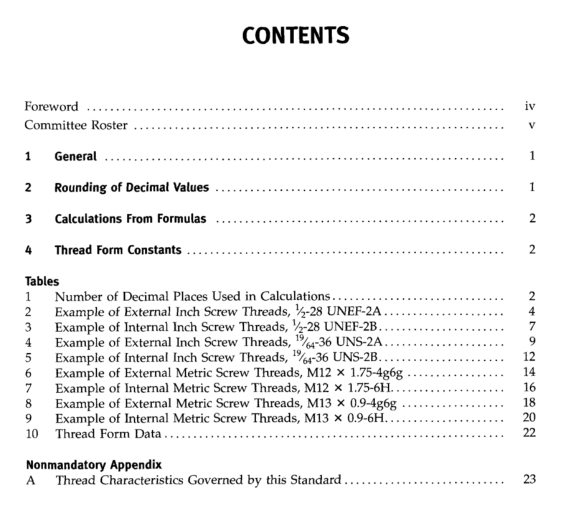 ASME B1.30 pdf download SCREW STANDARD THREADS: P R ACT1 I: E FOR CALCULATING AI D ROUNDIN[E DIMENSIONS
2.1.4 The final rounded value is obtained from the most precise value available and not from a series of successive rounding. For example, 0.5499 should be rounded to 0.550, 0.55 and 0.5 (not 0.6), since the most precise value available is less than 0.55. Similarly, 0.5501 should be rounded as 0.550,0.55 and 0.6, since the most precise value available is more than 0.55. In the case of 0.5500 rounding should be 0.550,0.55 and 0.6, since the most precise value available is 0.5500.
3 CALCULATIONS FROM FORMULAS 3
.1 General Rules
3.1.1 Values for pitch and constants derived from a function of pitch are used out to eight decimal places for inch series. The eight place values are obtained by rounding their truncated ten place values. Seven decimal place values for metric series constants are derived by rounding their truncated nine place values. See para. 4 for thread form constants. Values used in intermediate calculations are rounded to two places beyond the num- ber of decimal places retained for the final value, see Table 1.
3.1.3 For inch screw thread dimensions, four decimal places are required for the final values of pitch diameter, major diameter, and minor diameter with the exception of Class 1B and 2B internal thread minor diameters for thread sizes 0.138 and larger, see below. The final values for the allowances and tolerances applied to thread elements are- expressed to four decimal places except for external thread pitch diameter tolerance, Td2, which is expressed to six decimal places.
(a) Minor Diameter Exceptions for Internal Threads:
(1) Minimum Minor Diameter. All classes are calculated and then rounded off to the nearest 0.001 in. and expressed in three decimal places for sizes 0.138 in. and larger. For Class 3B, a zero is added to yield four decimal places.
(2) Maximum Minor Diameter. All classes are calcu- lated before rounding, then rounded for Classes l B and 2B to the nearest 0.001 in. for sizes 0.138 in. and larger. Class 3B values are rounded to four decimal places.
3.1.4 Metric screw threads are dimensioned in milli- meters. The final values of pitch diameter, major diame- ter, minor diameter, allowance and thread element tolerances are expressed to three decimal places.
3.1.5 Values containing multiple trailing zeros out to the required number of decimal places can be expressed by displaying only two of them beyond the last significant digit. EXAMPLE: 20 threads per inch has a pitch equal to 0.05000000 and can be expressed as 0.0500.
3.2 Examples The formulas in the examples for inch screw threads in Tables 2,3,4 and 5 are based on those listed in ACME 81.1, Unified Inch Screw Threads. Tables 2 and 3 are based on a size that when converted from a fraction to a decimal will result in a number that has only four decimal places. Tables 4 and 5 are based on a size that when converted will result in a number with infinite numbers of digits after the decimal point.
The formulas in the examples for metric screw threads in Tables 6,7,8 and 9 are based on those listed in ACME B1.13M, Metric Screw Threads. Tables 6 and 7 show the use of the tabulated values for allowances and tolerances (in accordance with IS0 965-1) for the calculation of size limits for standard diameter/pitch combinations listed in both IS0 261 and ACME B1.13M. The constant values differ from those used for inch screw threads, in accordance with the policy of rounding of this Standard, because metric limits of size are expressed to only three decimal places rather than four.
4 THREAD FORM CONSTANTS For thread form data tables, see Table 10. The number of decimal places and the manner in which they are listed should be consistent. Thread form constants printed in older thread standards are based on a function of thread height (H) or pitch (P). The equivalent of the corresponding function is also listed. There are some constants that would require these values to 8 or 7 deci- mal places before they would round to equivalent val- ues. For standardization the tabulated listing of thread values based on a function of pitch has beenestablished, with thread height used as a reference only. All thread calculations are to be performed using a function of pitch (P), rounded to 8 decimal places for inch series and as designated for metric series, not a function of thread height (H). Thread height is to be used for refer- ence only.