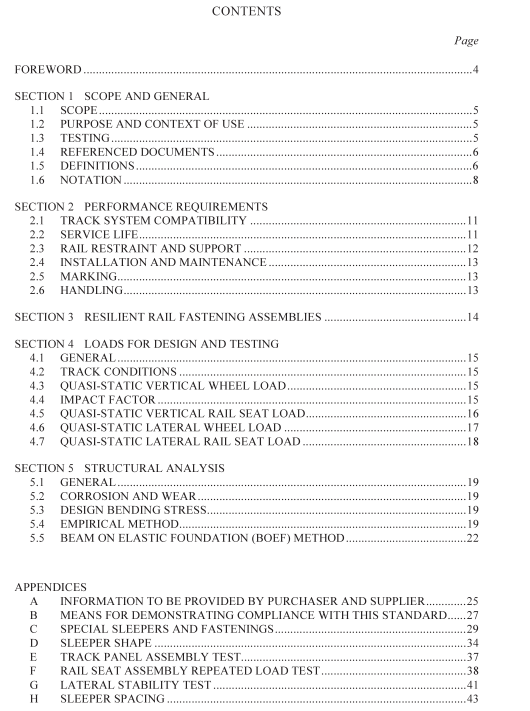 AS 1085.17 pdf download – Railway track material Part 17: Steel sleepers
1.1 sCOPE
This Standard specifies the performance requirements and gives design and testing methodsfor trough-shaped steel sleepers and their associated components for use in railway track. Italso sets out requirements for the performance of rail-insulating components.
NOTES:
l Sleepers are generally designed to suit a specific rail profile and gauge with a given fastening.2Guidance on information that should be provided by the purchaser and supplier is given inAppendix A.
3Guidance on means for demonstrating compliance with this Standard is given in Appendix B.4Guidelines on the design and manufacture of special sleepers and fastenings are given in
Appendix C.
1.2 PURPOSE AND CONTEXT OF USE
1.2.1 Function
Sleepers are support members that are part of the structure of railway permanent way.Theyare embedded into the ballast and support the rails above. They tie the rails togethermaintaining gauge and rail position and resisting lateral and longitudinal movement of therail system.Fastenings, as part of the sleeper assembly, secure the rails to the sleeper.
1.2.2 Action
Sleepers are subject to—
(a)loads imposed by the passage of rolling stock on the rails and during maintenance;(b)loads generated by thermal effects on the rail and by ballast movement; and
(c)fatigue, wear, damage and corrosion.
1.3TESTING
Testing shall be conducted by a laboratory appropriately qualified to carry out the tests.Testing shall be carried out on sleeper assemblies or elements that have been producedusing the processes and the plant, and with the materials that the manufacturer uses orintends to use in mass production. The tests given in this Standard are for the design andacceptance of steel sleepers.
Testing shall be carried out using the rail profile (or part of the rail profile, as appropriate)and the sleeper assembly，including rail fastening,which is intended to be used. Thisincludes the use of spacers or other variation in configuration(e.g., multiple sets of holes).
1.4 REFERENCED DOCUMENTS
The following documents are referred to in this Standard:
AS
1085 Railway track material
1085.19 Part 19: Resilient fastening assemblies
1171 Non-destructive magnetic testing—Magnetic particle testing of ferromagnetic products, components and structures
1199 Sampling procedures and tables for inspection by attributes
1365 Tolerances for flat-rolled steel products
1399 Guide to AS 1199
1594 Hot-rolled steel flat products
2312 Guide to the protection of iron and steel against atmospheric corrosion by the use of protective coatings
2758 Aggregates and rock for engineering proposes
2758.7 Part 7: Railway ballast
AS/NZS
1100 Technical drawing
1100.101 General principles
3678 Structural steel—Hot-rolled plates, floorplates and slabs
ISO 9001 Quality management systems—Requirements
ISO 9004 Quality management systems—Guidelines for performance improvements
SAI HB18 Guidelines
HB18.28 Guide 28—General rules for a model third-party certification scheme for products
Australasian Railways Association
Review of Track Design Procedures Volumes 1 and 2, 1991 (ISBN 0 909582 01 7)
HETENYI, M. Beams on elastic foundation. The University of Michigan Press: Ann Arbor,1967
1.5 DEFINITIONS
For the purpose of this Standard, the definitions given below and those shown in Figure 1 apply.
1.5.1 Cant
The inward tilt of the rails with respect to the sleeper.
1.5.2 End spade
The turned-down end of the sleeper, which provides lateral resistance and stability.
1.5.3 Fastening
The component or group of components of a steel sleeper system, which fastens the rail to the sleeper.
1.5.4 Gauge corner
Transition surface separating the rail running surface from the rail side.
1.5.5 Gauge point
The point on the side of the rail head 16 mm beneath the top surface of the rail at which track gauge is measured.
1.5.6 In-face
Where sleepers are installed in every position rather than interspersed with other sleepers in between.
1.5.7 Lateral load
A load or vector component of a load at the gauge corner of the rail parallel to the longitudinal axis of the sleeper and perpendicular to the longitudinal axis of the rail.
1.5.8 Longitudinal load
A load along the longitudinal axis of a rail.
1.5.9 Pod
Volume enclosed by the top, end spades and sides of the sleeper.
1.5.10 Rail insulation pad
A component of a steel sleeper system that electrically insulates the rail from the sleeper.
1.5.11 Rail seat
The area on the top of the sleeper on which the rail sits extending between the field and gauge shoulders.
1.5.12 Shoulder
A component that is attached to, fitted to or forms part of a steel sleeper, to prevent lateral movement of the rail.
1.5.13 Side
Side of the sleeper projecting into the ballast layer (see Figure 1).

AS 1038.16 pdf download - Coal and coke—Analysis and testing Part 16: Assessment and reporting of results

AS 1110.2 pdf download - ISO metric hexagon bolts and screws— Product grades A and B Part 2: Screws