AS 1038.16 pdf download – Coal and coke—Analysis and testing Part 16: Assessment and reporting of results 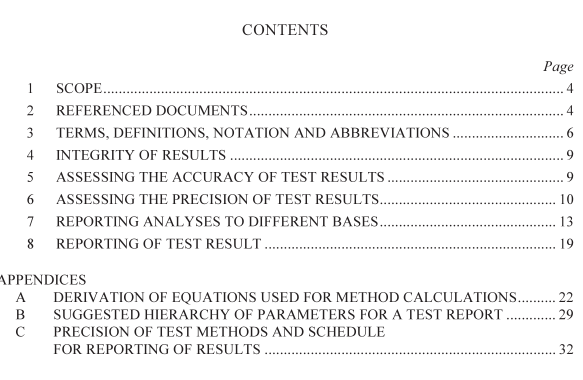 AS 1038.16 pdf download – Coal and coke—Analysis and testing Part 16: Assessment and reporting of results
When a result for a QC sample is outside the warning limit (but still inside the control limit, testing may continue, but action should be taken to investigate the cause for the outlying result before results go outside the control limits. Further information may be obtained using additional tests on the control chart. A set of eight supplementary tests used for interpreting patterns in control charts is schematically presented in Figure 2. Although this can be taken as a basic set of tests, analysts should be alert to any unique patterns of points that might indicate the influence of special causes in their process. These tests should therefore be viewed as simply practical rules for action whenever the presence of assignable causes is indicated. An indication of any of the conditions stipulated in these tests is an indication of the presence of assignable causes of variation that must be diagnosed and corrected. The upper and lower control limits are set at a distance of 3s above and below the central line. For the purpose of applying the tests, the control chart is equally divided into six zones, each zone being 1s wide. These are labelled A, B, C, C, B, A with zones C placed symmetrically about the central line.
6.2.3 Intermediate precision The QC sample testing described in Clause 6.2.1 also provides the user of a test method with an intermediate measure of the precision of the test. The intermediate precision can be calculated from the QC sample standard deviation using the equation: R INT = 2.83 s . . . 6(5) The value obtained for R INT should lie between the repeatability and reproducibility limits, i.e. r < R INT < R. A value greater than r should be expected as results are obtained over a greater time and may be performed by different operators and using different equipment. A value of less than R is expected as all results are produced in the same laboratory. 6.3 Uncertainty of measurement Users of the AS 1038 and AS 2434 series of coal and coke test methods and those who use the results obtained by these methods should be aware of the variability of the results which may be obtained, which is commonly referred to as the uncertainty of measurement. When a laboratory and its client agree on the test method to be used for a particular analysis, then it is assumed that all parties are aware of this variability. NOTE: The best estimate of the variability of these test methods is the repeatability and reproducibility values quoted within each test method and duplicated in Appendix C of this Standard. A laboratory using any of the test methods from the AS 1038 and AS 2434 series of coal and coke test methods should demonstrate its ability to meet the variability of the Standard methods by following the process described in Clauses 6.1 and 6.2 of this Standard. A client of a laboratory using any of the test methods from the AS 1038 and AS 2434 series of coal and coke test methods should ensure that the laboratory is following the process described in Clauses 6.1 and 6.2 of this Standard. In some cases, additional sources of measurement variability may occur. These may need to be assessed and quantified, for more information on this process refer to the Eurachem/CITAC Guide ‘Quantifying Uncertainty in Analytical Measurement’. 7 REPORTING ANALYSES TO DIFFERENT BASES 7.1 General Chemical analysis methods covered by this Standard are carried out on coal or coke samples that have been pulverized to pass a 212 μm test sieve that complies with AS 1152. Samples are air-dried for minimal time to achieve effective equilibrium with the temperature and humidity of the laboratory atmosphere. Results so obtained may require conversion to another of the bases defined in Clause 3. Factors for conversion between bases are summarized in Table 1.