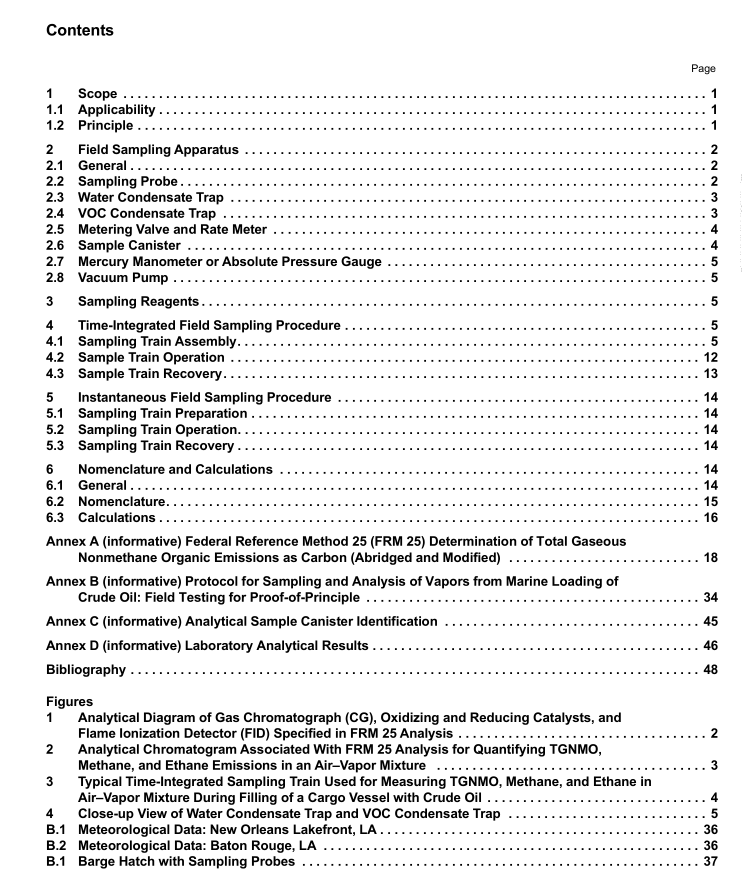 API TR 2574 pdf download Field Testing Protocol for Characterization of Total Gaseous Nonmethane Organics (TGNMO), Methane, and Ethane in Air–Vapor Mixture During Filling of a Cargo Vessel with Crude Oil
1 Scope 1.1 Applicability This method applies to the measurement of volatile organic compounds (VOC) as total gaseous nonmethane organics (TGNMO), methane and ethane from the air–vapor mixture that is expelled during filling of a cargo vessel with crude oil. This protocol utilizes a modified version of U.S. EPA Federal Reference Method 25 (FRM 25) entitled: “Determination of Total Gaseous Nonmethane Organic Emissions as Carbon.” Annex A contains an abridged and modified version of FRM 25 to meet specific project quality objectives (PQOs).While the field testing in support of this protocol (see Annex B, Annex C, and Annex D) was performed only for the loading of crude oil into barges, the method could be suitable for loading of any volatile organic liquid into any type of vessel or compartment from which vapors are exhausted through a single vent opening where the field sampling can take place.
The objective of this field testing protocol is to provide standardized testing methodology for quantifying TGNMO, methane and ethane emissions in the air–vapor mixture that is expelled from cargo compartments during filling with crude oil. The characteristics and composition of the air–vapor mixture expelled from a cargo vessel into the atmosphere during filling with crude oil is dependent upon the characteristics of the crude oil, including such variables as volatility, temperature, etc. The changing characteristics of the exhausted air–vapor mixture can affect the application of FRM 25 in quantifying the concentration of TGNMO, methane, and ethane in the air–vapor mixture. This field testing protocol provides guidance on utilizing various configurations of FRM 25 in the characterization process.
They are:
— Time-Integrated Sampling: The traditional FRM 25 sampling train configuration is used but modified by adding a water condensate trap in front of the volatile organic compound (VOC) condensate trap to drop out the water content found in the air–vapor mixture. The water condensate trap prevents freezing of the VOC condensate trap by the water molecules which would lead to reduced gas flow through the sampling system.
— Instantaneous Sample: In this configuration, the FRM 25 condensate trap(s) [i.e. water and VOC traps] are removed from the sampling train and instantaneous samples of the air–vapor mixture are acquired periodically during the filling process, utilizing a pre-evacuated canister. When carbon dioxide (CO 2 ) and water vapor are present together in the air–vapor mixture, they can produce a positive bias in the sample. The magnitude of the bias depends on the concentrations of CO 2 and water vapor. As a guideline, multiply the CO 2 concentration, expressed as volume percent, times the water vapor concentration. If this product does not exceed 100, the bias can be considered insignificant. For example, the bias is not significant for a source having 10 % CO 2 and 10 % water vapor, but it would be significant for a source near the detection limit having 10 % CO 2 and 20 % water vapor.
1.2 Principle An emission sample from the air–vapor mixture is withdrawn at a constant rate through an unheated stainless-steel sampling probe, a water-chilled condensate trap, and a dry ice condensate trap by means of an evacuated sample canister. After sampling is completed, the concentrations of TGNMO, methane, and ethane are determined by independently analyzing the condensate traps and sample canister fractions and combining the analytical results. The organic content of the condensate trap fractions are determined by oxidizing the nonmethane organics (NMO) to CO 2 and quantitatively collecting the effluent in a second evacuated canister; then a portion of the CO 2 is reduced to CH 4 and measured by a flame ionization detector (FID). The organic content of the field sample canister fraction is measured by injecting a portion of the field sample canister into a gas chromatographic column to separate the NMO from carbon monoxide (CO), CO 2 , and CH 4 ; the NMO are oxidized to CO 2 , reduced to CH 4 , and measured by a FID. In this manner, the variable response of the FID associated with different types of organics is eliminated. Figure 1 outlines the analytical scheme while Figure 2 illustrates the response of the FID to analysis of a field sample.